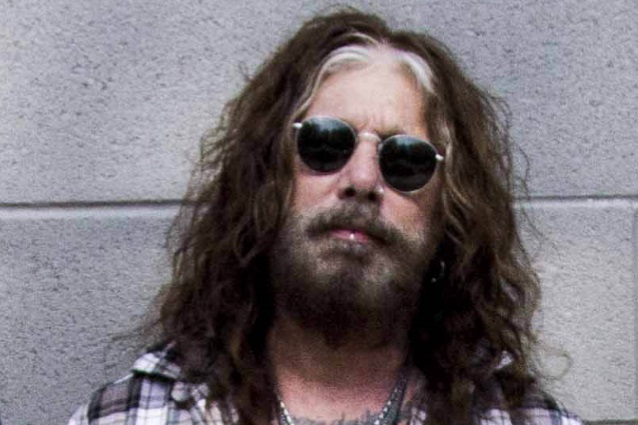 John Corabi says that he doesn't mind being constantly referred to as the former singer of MÖTLEY CRÜE, explaining that having that tag has allowed him to "continue doing new things."

Corabi joined CRÜE in 1992 as the replacement for the group's original singer, Vince Neil, who was dismissed due to personal differences. With Corabi on vocals, MÖTLEY CRÜE released one critically acclaimed full-length CD, which ended up being a commercial failure in the wake of grunge despite a Top-Ten placing on the album chart. When Neil returned to the fold in 1997, Corabi was left on his own and formed the band UNION with ex-KISS guitarist Bruce Kulick.

Asked by the TrueMetal.it web site if he is bothered by the fact that he is still labeled as the ex-frontman of MÖTLEY CRÜE even though it's been more than two decades since he exited the band, Corabi said: "No, 'cause it is what it is; I can't change it. It'd be like someone coming over to me and saying, 'Does it bother you that you're white?' Do you know what I mean? There's just some things you can't change. I did it. So I don't worry about it. Now, the only time I get a little pissy about it is if somebody comes to me and they give me shit for being in MÖTLEY CRÜE. And then I just sit there and I go, 'Hold on…'"

He continued: "A couple of months ago, I had someone write to me and they said, 'You're a loser.' And, 'Fuck you, MÖTLEY CRÜE is…' And they're telling me, 'MÖTLEY CRÜE is Tommy [Lee], Nikki [Sixx], Mick [Mars] and Vince.' Okay, tell me something new that I don't know. But I just wrote back to the guy and I go, 'Here's the deal, bro: I was in a band and I was asked to join, at the time, one of, if not the biggest American rock band in the world.' I go, 'Tell me, if you were in my position, you would not have done the same thing.'

"Now, we could sit here and go, does it bother me that, 20 years later, people still refer to me as the former singer? It could," Corabi added. "But on the other hand, on the positive side, which I always try to look at the positives, having that tag has kind of allowed me to continue doing new things. Even when I do my acoustic shows by myself, it will say, 'John Corabi, former…' and people, maybe out of curiosity, will come. So, it's fine. I don't caught up in a lot of that stuff. Even record reviews, reviews of shows, reviews of movies... I've talked to people that were, like, "Oh, God! I fucking hated 'Braveheart'.' But I went and saw it and I thought it was a great movie. To each his own. You know what I mean? So, it's all good."

Corabi in 2016 said that he would avoid talking about MÖTLEY CRÜE in the future because he didn't want his comments about Sixx to descend into a feud.

In an interview with Sweden Rock Magazine, Nikki said that writing the "Mötley Crüe" LP with Corabi was a prolonged and difficult experience. He went to call it "a very unfocused record" that was "painful for me, because John Corabi can't write lyrics, and I had to do all that work."

In February, Corabi released a live album of his performance of MÖTLEY CRÜE's entire 1994 self-titled album, recorded on October 27, 2015 in Nashville, Tennessee. "Live '94: One Night In Nashville" documents the album in its entirety along with the bonus track "10,000 Miles", which was originally released as a bonus track on the Japanese version of the "Quaternary" EP.

Corabi is currently the frontman of the supergroup THE DEAD DAISIES, which released its latest album, "Burn It Down", on April 6 via Spitfire Music/SPV.