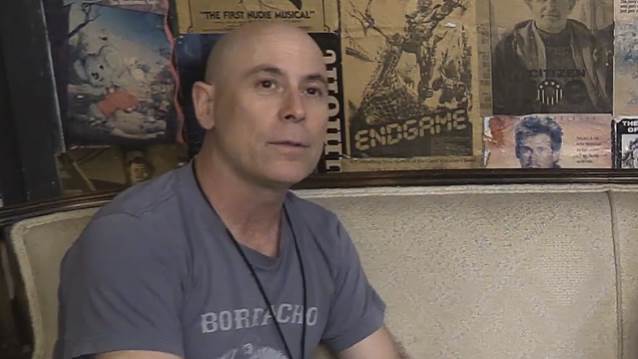 John Bush says that "the time is right" for ARMORED SAINT and ANTHRAX to tour together.

A founding member of ARMORED SAINT, Bush fronted ANTHRAX between 1992 and 2005 but was sidelined when ANTHRAX reunited with Joey Belladonna for a 20th-anniversary tour. When that collapsed, and relationships disintegrated with next frontman Dan Nelson, Bush returned for a time before Belladonna took the job back in 2010.

During an interview with Rock Titan conducted before ARMORED SAINT's July 11 concert in Sellersville, Pennsylvania, John was asked about the possibility of the two bands touring together in the not-too-distant future.

Pressed about the possibility of him getting up on stage with ANTHRAX and performing some of the songs from his era of the band, he said: "Who knows? I don't know if Joey Belladonna, if that was something that would make him uncomfortable, and I certainly would never wanna do that. But, you know, we're all veterans. And there's a lot of water under the bridge now."

John also confirmed that ARMORED SAINT is working on material for the follow-up to 2015's "Win Hands Down" album. "We've been writing, and we have to write some more songs, 'cause we've only written maybe a half dozen," he said. "You need at least a good nine, 10, 12 for a record. But, yeah, I think what we've written already sounds killer."

He continued: "'Win Hands Down' set the tone for a really cool follow-up. The only thing is it set the bar really high. It was a great record. I think it was one of our best. We got a lot of critical acclaim. I think we set the bar really high, and we've gotta step up and try to surpass that, and that's not gonna be an easy chore to do. But we're ready and I think we'll write some killer music. So, realistically, [it'll be out] probably sometime later next year. If we're realistic, if we create a little urgency, which we probably should do."