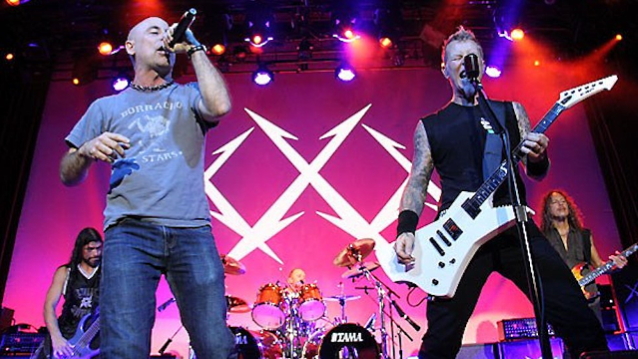 Former ANTHRAX and current ARMORED SAINT singer John Bush, who was offered an opportunity to join METALLICA in the early '80s but turned it down, spoke about his decision in a new interview with Waste Some Time With Jason Green. He said (as transcribed by BLABBERMOUTH.NET): "I've been talking about this for many years now. I'm always gonna be completely super flattered about the fact that I was asked to join METALLICA back in the early '80s. It just was never meant to be my destiny, is what I always say. There's no other singer that should have been the singer of METALLICA other than James Hetfield. That was meant to be, and that's kind of the way I see it. Like I say, I'm always flattered that I'm always connected to the history of that band — it's a huge feather in my cap, so to speak — but at the end of the day, it just was not my destiny to be the singer of METALLICA. I had a different fate in store."

Bush also talked about joining METALLICA on stage on December 7, 2011 for the second of four intimate shows at the Fillmore in San Francisco as part of the week-long celebration of the band's 30th anniversary as a band for fan club members only. "Yes, that was very cool," he said. "That was an awesome experience. We did that at the Fillmore in San Francisco. It was the 30th-anniversary shows that METALLICA did, which were really, really cool. They had all these various guests coming on stage with them at the time — everyone from Ozzy [Osbourne] to King Diamond to Lou Reed to Marianne Faithful; a lot of people associated with METALLICA through the years. And ARMORED SAINT, we got to open for [METALLICA] that one particular show — one of the four — and then that was the day that I actually came on stage and sang 'The Four Horsemen' with them, which was an incredible experience. And the whole thing was really, really awesome — just a beautiful thing to be a part of. So I always have that as a great memory in my life. We had a couple of friends that were there that came with us, and my wife was there. And we had a lot of fun doing that. Like I said, I'm really flattered that METALLICA thought of me as a person that was good enough to be in their band. But, like I said, it just wasn't meant to be something that happened for the rest of the band's career."

Anther singer who was being considered for the frontman position in METALLICA was Jess Cox of Newcastle, England's TYGERS OF PAN TANG.

In a 1989 interview with Metal Forces, drummer Lars Ulrich talked about what METALLICA could have sounded like had Bush ended up fronting the group. He said: "Only a couple of days ago, we were actually sitting around talking about how it would be now if John Bush had joined the band. Obviously, it's impossible to know how different it would have been, but I can't imagine METALLICA without James Hetfield up there growling into the microphone, fucking curved over and everything. It's really weird to think about it. I mean, nothing against John Bush — I think he's a great vocalist — but ... Well, thank God it didn't happen."