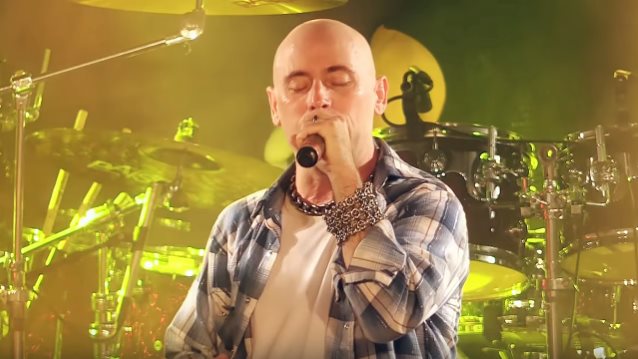 John Bush says that he has "entertained" the idea of embarking on a special tour during which he would perform material from his time as the singer of ANTHRAX.

Asked by Eonmusic if he has thought about assembling a band and going out and playing some of Bush-era ANTHRAX songs live again, John said: "I've entertained it. I haven't done anything to actually put that into motion, but I think it would be cool to do maybe a handful of shows. In what capacity, I don't know, in what time frame, I don't know."

He continued: "I'm pretty honest with my age, even though I feel like my voice is better than it's ever been, and I certainly feel extremely youthful and exuberant on my fifty-three years of age. But I'm also getting older, so it's not like this is something I'll probably want to do when I'm sixty.

"But in terms of actually doing that, putting it into motion, having a discussion with those guys? I think they're in a place where their band is comfortable, and I know Joey doesn't want to have me come in and disrupt that, and I don't want to do that; he's a nice guy and that's not my intention whatsoever.

"I couldn't be happier with my place in ARMORED SAINT; these guys are my brothers, and I love what we did with [our latest album] 'Win Hands Down'. That being said, would it be cool to play a show or two and play some of those [ANTHRAX] songs? Yeah, but I don't know when, how [or] why. I haven't thought of that, quite honestly."

Bush also talked about how he feels looking back on the material he recorded with ANTHRAX, saying: "I think 'Sound Of White Noise' is an awesome record. I think that all the records were pretty cool in their own way. Some might have been a little bit more focused, and certainly 'Sound Of White Noise' was. It didn't take a long time to mix that record, I remember that. I thought 'Stomp 442' was a really cool record, but it came on the heels of a major change at Elektra Records, where the head of the label, Bob Krasnow — who basically created that label — was fired, and they brought in a new president who told us right after we had recorded 'Stomp' that she would have never made the deal with ANTHRAX. And so we were thinking as we were in that meeting, 'That doesn’t sound like it's going to be a good thing,' and it wasn't! So that sucked, and then we left and we made 'Volume 8', which I thought was a cool, interesting record, but we were also on an upstart label and took a chance, and that didn't fare too well. And then we made 'We've Come For You All', which seemed to be a little more focused, the most, probably, since 'Sound Of White Noise', which I thought was a killer record."