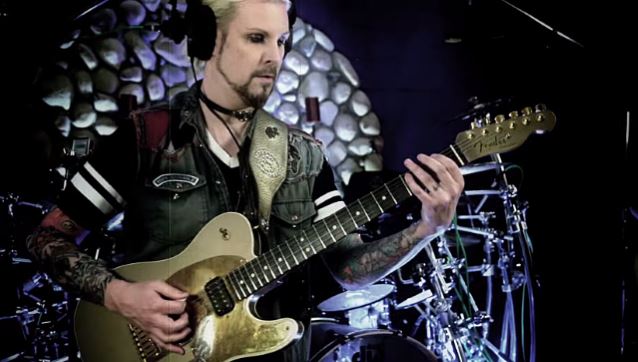 John 5, whose first "big break" came when he was selected by Roth to play lead guitar on the critically well-received 1998 release "DLR Band", tells Canadian rock journalist Mitch Lafon in a new interview (hear audio below): "[Dave and I] just made another record, and it's, like, the 'California Sessions', [Dave] was calling it. And it's 11 of the greatest songs you'll ever hear, and it's just me and Dave, and we had Gregg Bissonette play drums on it. And it's unbelievable. There's a song called 'Somewhere Over The Rainbow Bar & Grill'. And you know, just great, great songs. And hopefully sometime it'll see the light of day. But he's, of course, busy with VAN HALEN and all that stuff. But it's an incredible record."

He added: "[The new album with Dave] was made not too long ago — like, probably, maybe, a year and a half ago or something like that. 'Cause I always go over to his house and we write music and things like that. It's a lot of fun. They're all original songs. I would just go over to his house during the day and write this music and then he would book the studio at night. So we would go into A&M Studios — Henson Studios, it's called now — and we'd record. And it's so great. I mean, it sounds like just Dave from that 'Van Halen I' or 'II' or 'Women And Children First' era, [in terms of his] singing [style], and it's incredible, man. It's really incredible. He loves it too, so maybe it'll see the light of day sometime."

John 5 also spoke about his collaboration with JUDAS PRIEST singer Rob Halford on the 2WO project, which released the much-maligned "Voyeurs" album in 1998 via Trent Reznor's Nothing Records label.

"When we were making that record, it was a very, very, very guitar-heavy record — very heavy guitar record," he added. "And I remember Tom Morello from RAGE AGAINST THE MACHINE heard it and he was, like, 'This is my favorite record. This is incredible.' 'Cause it was really aggressive and heavy and it had Halford going nuts on it. And we got signed to Nothing Records, Trent Reznor's label. And then, I was still making money and stuff, so I had to go on tour with somebody, and Halford took it to New Orleans with Trent [to remix it], and it totally changed; like, they took a lot of the guitars out. This was at a time when guitars weren't really that popular, and they took a lot of these guitars out, so the record completely changed. I was shocked and disappointed — 'cause all the guitars were taken out. But what was so strong about that album is those songs were so strong; they're such strong songs that it still holds up today. And people really enjoy that record. Halford has the songs with the guitars and all that stuff, and it sounds incredible."

John 5 digitally released a new solo single, "This Is My Rifle", on June 17. The track is taken from his eighth solo album, "Careful With That Axe", to be made available on August 12 through 60 Cycle Hum. The effort features Rodger Carter on drums and Matt Bissonette on bass.