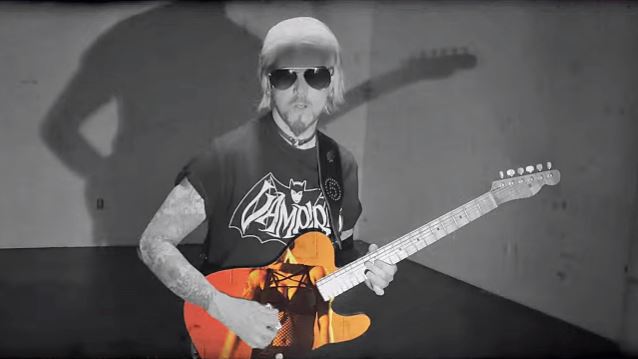 "Now Fear This", the new video from former MARILYN MANSON and current ROB ZOMBIE guitarist John 5, can be seen below. The clip was directed by Matt Zane and contains live footage that was edited and directed by Zane.

"Now Fear This" will appear on John 5's new solo album, "Guitars, T!ts And Monsters", due later in the year.

"This is my fourth video for the fourth month of the year," the guitarist tells Loudwire. "I'm having a lot of fun releasing a new video the first of every month. At the end of the year, I will release the physical CD called 'Guitars, T!ts And Monsters' with a documentary, all the videos, and all the songs. I hope you enjoy this new song 'Now Fear This'."

He adds: "All my life I've really enjoyed music: making music, playing it, and recording it. It's such a relief and a joy to do what I do for a living. I know it sounds corny, but I think the meaning of life is to do what you love and be happy."

John has had an illustrious career collaborating with chart topping artists such as LYNYRD SKYNYRD, Ricky Martin, and Rod Stewart. John has performed on critically acclaimed world tours with Marilyn Manson and Rob Zombie. Later, John ventured into the world of film score composing for Rob Zombie's "The Lords Of Salem". In 2004 he branched out into a successful solo career and has since released eight studio albums.