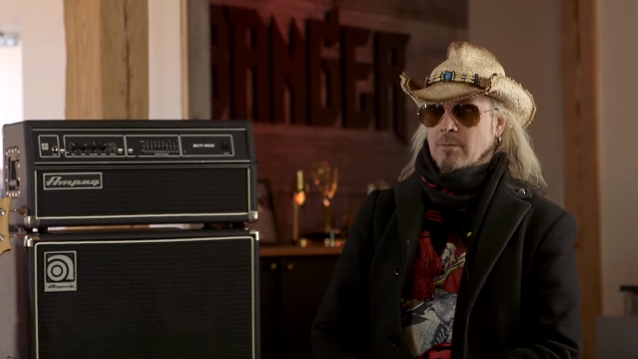 On jumpstarting his musical career:

John: "I drove out with the drummer from MEGADETH, Chuck Behler, he was on the 'So Far…So Good…So What?' album. We drove out together and I didn't know anything. I came from a very secluded, very safe upbringing and I didn't know anything. I got to L.A., slept on the floor and these other guys were around, they stole my money — not Chuck, but friends and stuff, stole my money. I had nothing. I had nothing the first day. I knew one other person and I went and stayed with him and lived in a room, a rehearsal room, no bathroom or anything. I just sat in there and played. I was a valet for celebrity parties. I would park everybody's car and I would take their car because they would be in this party for three hours, so I would be driving Don Henley's car around and pick up my friends."

On his backing band in JOHN 5 AND THE CREATURES, which includes bassist Ian Ross and drummer Logan Miles Nix:

John: "Those poor guys. I rehearse them like crazy. It's a difficult show. It's a difficult show because there's so much going on. There's all these notes, there's all these things and if someone is going like this [waves hands] at the show and they're trying to get your attention and if someone is pounding on your foot off-beat or something like that, you're, like, 'How distracting is that?' When you're going like this and it's got to be just on time perfect and if someone is off-beat, you're like 'Ah!' I rehearse the band so hard just for those things because those things happen. Last night, I was getting shocked up there. I'm playing: 'Okay, I'm getting shocked, too, but I can't take this hand away and signal anything because I'm playing.' So, it's difficult."

On trying to replicate studio albums exactly in the live arena:

John: "I guess everything is from when you're a kid. I went to go see a certain band and I was so excited because I knew every lick, I knew every fill and every lyric and all that stuff and I was so excited. When I got there, and they would change the songs around so much and I remember I was disappointed a little bit. Then I would go see another band and it was exact and I really think there is an art of playing something exactly how it was written, I really do. It's just like a piece of music, like Mozart, you're going to change it. You're going to play it just how it is. It kind of bit me in the ass because my instrumental stuff, now I have to play everything exactly and there's a lot of notes to remember over and hour-and-a-half show. There's got to be close to five hundred thousand notes to remember in a perfect sequence, but I really enjoy playing things exactly how they're recorded. And when I'm recording now, I'm, like, 'Am I going to be able to do this live? Am I going to be hitting this pedal and doing this?' I always record my stuff because then when I play live, it sounds just like the record."

On whether he considers himself to be a "musical chameleon":

John: "I really wanted to be a session guy and I saw this show, this thing on HBO and it was 'Session Man'. I was so little and I was, like, 'That's what I want to do. This guy gets to play on all these records, which he knew all these styles.' That show changed my life. I started at such a young age learning every style of music, the country and the bluegrass and the western swing and the rock — everything. It really helped me when I started working a lot and touring a lot because people would ask for this and that. Like, when I went on an audition for K.D. Lang, it was a lot of open tuning or Nashville tuning and things like that. Luckily, I had some education on that and it helped a lot."

On whether being in the studio and onstage satisfies him musically:

John: "I'm always happy with a guitar in my hand. Luckily, I get to record, then also play live, so I have the best of both worlds in that sense. Sometimes if you're in the studio for a very long time, you want to get out and play live shows and vice versa. So, it's a wonderful thing. I get to do all this stuff with the guitar and the things I love to do. It's a wonderful life and I couldn't be happier, even when it's cold and rainy, I'm so lucky to be here."

JOHN 5 AND THE CREATURES' new full-length album, "Invasion", will be released in July. Just like 2017's "Season Of The Witch", the new disc — produced and mixed by Barry Pointer — is being made available via a series of music videos.