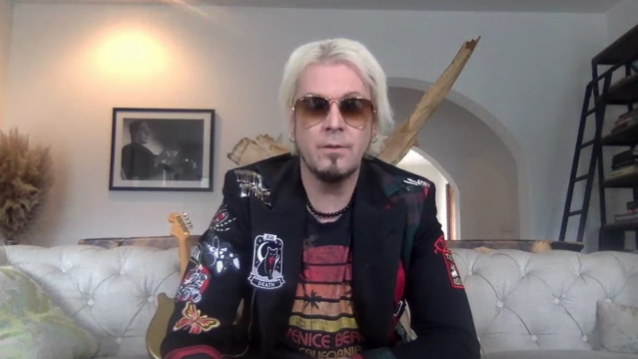 John 5 has opened up about how he landed the gig as David Lee Roth's guitarist more than two decades ago.

The 50-year-old axeman, who got his first big break playing on Roth's solo album, "DLR Band", before securing stints with Marilyn Manson and Rob Zombie, spoke about his working relationship with the VAN HALEN frontman during a recent interview with The Sessions.

Asked how he came to collaborate with Dave, John said (as transcribed by BLABBERMOUTH.NET): "I was reading [Roth's 1998 autobiography 'Crazy From The Heat']. I was at my friend's house. And there was a number in the back of the book where you could get ahold of the management company. And I thought to myself, 'Hmm, I think I'm going to reach out and call this number and see what's going on.' 'Cause I knew Dave wasn't doing much at the time, and I loved VAN HALEN, and I loved Dave Lee Roth. And I said, 'Are you guys accepting any [music] right now or anything like that?' And they said, 'Well, not really. But you can send a CD, and we'll see what we've got.' And I was, like, 'Oh my God!' Just that little bit, I was shocked. I was, like, 'This is insane.' So I go there. I record with [producer] Bob Marlette. And I do my best VAN HALEN — I do 'Slam Dunk' and I do all these songs. Of course, no vocals — just my best VAN HALEN impersonation. And I sent it to them, and they said, 'We like it. Can you send three more?' I was, like, 'God. This is the most crazy thing ever.' So, I did three more, and they said, 'We like these too. Can you do three more?' And I said, 'I'm sorry, but I don't have any more money.' Back then, studios costed a lot of money. Now we can just be in our house and do it. And they said, 'Okay, well, Dave wants to meet you. Go to his house.'"

John continued: "Listen, David Lee Roth is not around; he's not hanging out. It's very hard to meet David Lee Roth. And I go to his house. And this is the house where they filmed 'Pretty Woman', they did all the photo shoots for the early VAN HALEN, they rehearsed in this basement. And this is the house. And there's Dave in his overalls. And he's, like, 'John, great to see ya. We're gonna make a record. I really like what you're doing.' And I was, like, 'Oh my God.' I couldn't believe it.

"So, you just have to go after things and do things and make it work."

John 5's latest sessions with Roth apparently took place at least six years ago, with John 5 unveiling a snippet of the album during an interview with Masters Of Shred back in May 2019.

In 2019, Roth was asked by Meltdown of the Detroit radio station WRIF if his LP with John 5 will be made available at some point. He responded: "It will. There's been a revision of things, and I can start making real plans and start marching into the future. And, of course, you'll start hearing that material. This is material that we wrote variously for me solo and for VAN HALEN, and it's quite a bank of stuff."

In a 2014 interview, John 5 described the LP as "11 of the greatest songs you'll ever hear, and it's just me and Dave, and we had Gregg Bissonette play drums on it. And it's unbelievable," he said. "There's a song called 'Somewhere Over The Rainbow Bar And Grill'. And you know, just great, great songs."