JOHN 5 AND THE CREATURES — comprised of world-renowned guitarist John 5, bassist Ian Ross and drummer Logan Miles Nix — are following up on this year's live album, "It's Alive!", with a brand-new full-length studio record coming in 2019. The new disc, titled "Invasion", will be teased on New Year's Day 2019 by way of a brand new music video for the new track "Zoinks!", inspired by "Scooby-Doo!" Directed by Matt Zane with animation from Disney animator Brett Broggs ("Frozen", "Wreck-It Ralph"), the video will also feature the voice acting talents of Nikki Sixx, Susan Olsen (known for her role as Cindy Brady on "The Brady Bunch"), and Fred Coury. Coury also is credited for scoring the video alongside John 5. The video will be premiered via John 5's YouTube channel.

The official release date for "Invasion" will be announced in 2019.

"Invasion" was produced and mixed by Barry Pointer, and will be released via a series of music videos, just as John 5 released his 2017 studio album, "Season Of The Witch".

In celebration of the upcoming album, JOHN 5 AND THE CREATURES will kick off the second leg of his North American "Invasion" tour on February 23, 2019 in Las Vegas, Nevada. The tour will feature support from blues-rock guitarist Jared James Nichols.

John 5 says: "Get ready for the 'Invasion' tour! I will be playing some songs from my new record, 'Invasion', a brand new medley, and much more. I'm really excited to have Jared James Nichols out with us. This tour is something you're not going to want to miss!"

Jared James Nichols adds: "As a young budding guitarist, I grew up with a Guitar World cut-out picture of John 5 on my bedroom wall. He was always one of my 'guitar heroes'. He is the total package... insane technique, amazing musicality, with a style and look all of his own. Needless to say, when I got the call for this tour, my jaw dropped. I'm absolutely honored to warm up the stage for him every night across America and Canada. I'm getting my chops ready to tear it up!"

Tickets are available now via individual venues, and VIP packages will be available soon exclusively via www.john-5.com/store.

John 5 has worked with a varied range of artists, performing as guitarist for some of the biggest headlining rock bands in the world such as ROB ZOMBIE and MARILYN MANSON, as well as playing session with Paul Stanley, Rod Stewart, LYNYRD SKYNYRD and more. Slash has called John 5, "one of the most mind-blowing guitarists around" and Rob Zombie has dubbed him "a fucking shredder." John 5 has released seven solo albums to date, as well as a remix album, and has written music for the likes of Avril Lavigne, GARBAGE, Ricky Martin and others. 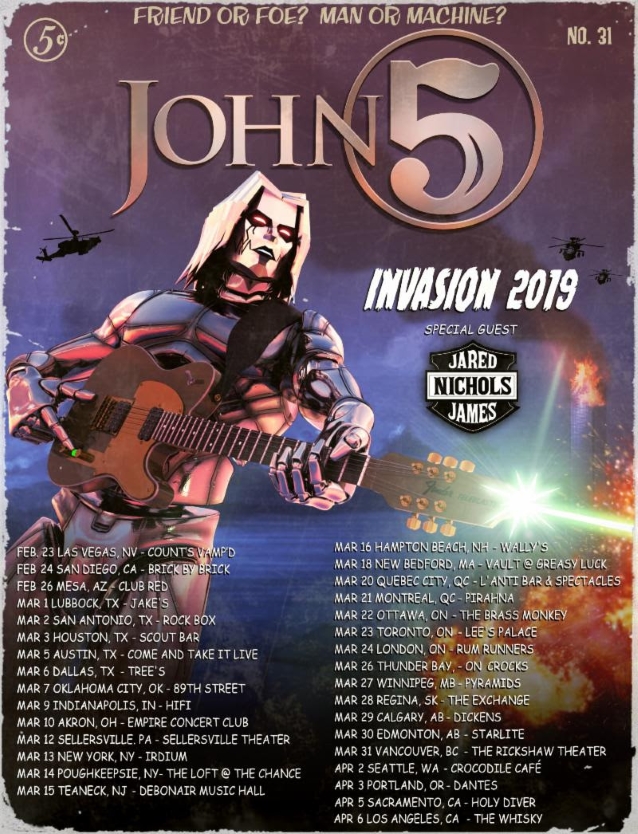