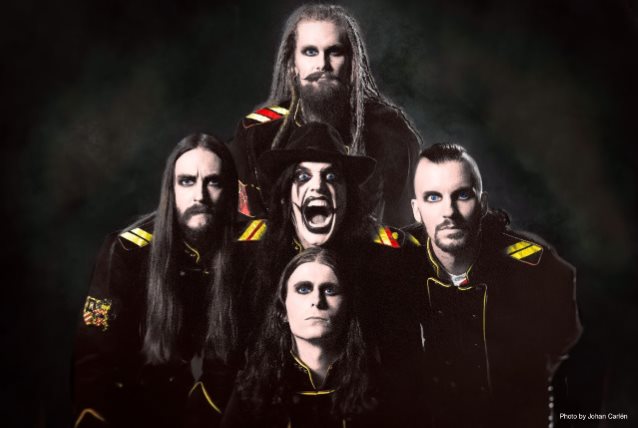 Vocalist Johannes Eckerström of Swedish metallers AVATAR was interviewed on the February 16-18 edition of Full Metal Jackie's nationally syndicated radio show. You can now listen to the chat using the Podbean widget below. A few excerpts follow (transcribed by BLABBERMOUTH.NET).

On the lyrical approach of the band's new "Avatar Country" studio album, which is a more positive one compared to 2016's "Feathers & Flesh":

Johannes: "In one way, I think it's a very natural thing for any band to do. Once you did A, you want to do B, once you paint something blue, the next painting you want it to be red because you're done with blue for a while. I think that is part of, if not all bands, many band's journey, go forward, whatever you end up doing, you don't want to do what you just did. But in this case, also, because 'Feathers & Flesh', it was a story about failure, fear, loss, death. It was very dark and very sad, really. Sadness was a big part of it and it was a piece of fiction. So, this is a reaction against all that. Instead, we decided to speak the truth and open the borders to Avatar Country; tell people the truth of the nature of our king and since the album is a celebration of our king, it naturally becomes, as you said, about hope, strength, life, really. It's a heavy metal celebration this time around, at least compared to what we done in the past. It has some heavy messages anyway. In the name of the king, let's celebrate."

On why every song title on "Avatar Country" has the word "king" and whether the word is significant to the overall concept of the album:

Johannes: "I think it speaks for itself: That we are celebrating our mighty king of Avatar Country, who is a glorious king indeed, so glorious that he has seven solos in the first song. There are so many aspects to this king and there are so many different ways of telling his story and so many aspects of him, that you do need a full album. So, that is why yes, you're right, we have 'Glory To Our King', 'Legend Of The King', 'King After King', 'King's Harvest', 'The King Speaks', or my personal favorite title, 'Silent Songs Of The King Part 1 - Winter Comes When The King Dreams Of Snow', because there's so much to him."

On why AVATAR prefers the concept album format:

Johannes: "First and foremost, the whole idea when we did 'Feathers & Flesh' was that it was not comfortable to do it. We didn't know exactly how to do one or what it meant to write within a very locked-in concept, which is the original reason why we did so. Then I heard from at least, the more progressive world of music, that's kind of a cliché almost, that once you start doing concept albums, it's hard to stop. And this wasn't meant to be a concept, again, until we realized the time was right for people to learn about our king. Because we have been hinting about the existence of Avatar Country. We have been hinting about the position of our king within the kingdom. For instance, in the new music video [for 'The King Wants You'] you do see the Avatar Country flag and you did see it onstage. Well, if you looked at some of our earlier albums, you would see that in every thank-you list, we would always give thanks to people and on the last page, as it tends to do, we always gave special thanks to Kungen. 'Kungen' is Swedish for 'The King'. The nature of our king and the timing of it all and what we now have the urge to do, kind of forced us to do something that essentially is a concept album for the second time in a row, but I do not believe that the next album will be one. I believe that will be important to break that pattern because doing a concept album broke the pattern of what we did before. That is what it's always about for us. We don't want to repeat ourselves, we don't want to write the same songs or the same album twice. It's all about finding new angles and a new way of casting light on what we're doing."

"Avatar Country" was released on January 12 via Entertainment One in North America and Century Media Records in the rest of the world. The disc was produced by Jay Ruston (STONE SOUR, ANTHRAX, STEEL PANTHER) last summer at Spinroad Recording Studios in Gothenburg, Sweden.