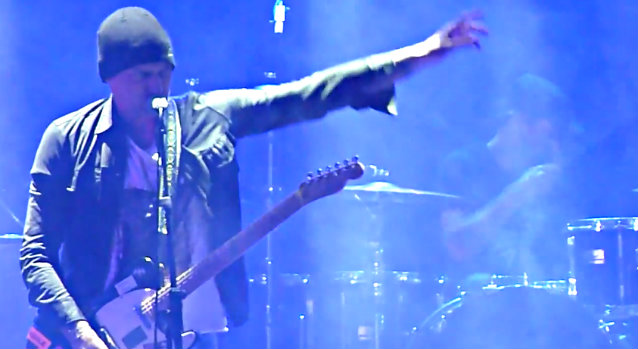 "I have decided to leave TIAMAT. My health, etc., doesn't work any longer.

"I say 'leave,' because I don't claim anything TIAMAT.

"If the other guys wanna continue, fine. Go ahead. Get a great good-looking vocalist, sign to Century Media and just do it. But I'm out and not even interested apart from wishing all the best for the band. All contracts and such will be handed out to Anders [Iwers, bass], Lars [Sköld, drums] and Roger [Öjersson, guitar], if they're into it. I want nothing from this.

"I was spoiled too much of being an adult. Give someone a better chance.

"I will do the four festivals we have booked for the summer.

"Face it, there are other bands, plus even TIAMAT might get better!

"Love, my brothers, and thank YOU for your support! KISSES!"

Fan-filmed video footage of TIAMAT's December 13, 2013 performance at the Eindhoven Metal Meeting at Effenaar in Eindhoven, The Netherlands can be seen below.

TIAMAT's tenth studio album, "The Scarred People", entered the official chart in Sweden at position No. 11.

"The Scarred People" was recorded at Woodhouse Studios in Hagen, Germany with producer Siggi Bemm. The CD cover artwork was created by Johan Edlund.

In a 2013 interview with Metal Underground, Edlund stated about the musical direction of "The Scarred People": "We're happy being TIAMAT; that's the only label we put on ourselves. In fact, TIAMAT is by far our own biggest influence. We often quote ourselves, what we've done in the past, when needed in the studio. There are a lot of elements both in the music and in the lyrics that we have developed over the years that feel genuinely TIAMAT, be it a clean electric guitar sound, a special way of drum patterns, certain ways to express lyrics. We often go back there and sample ourselves, so to speak." 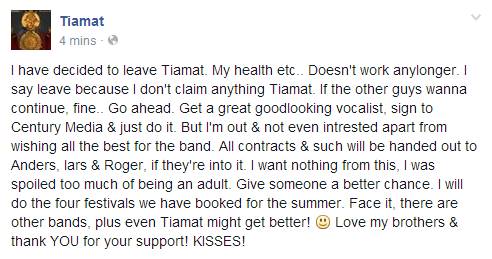