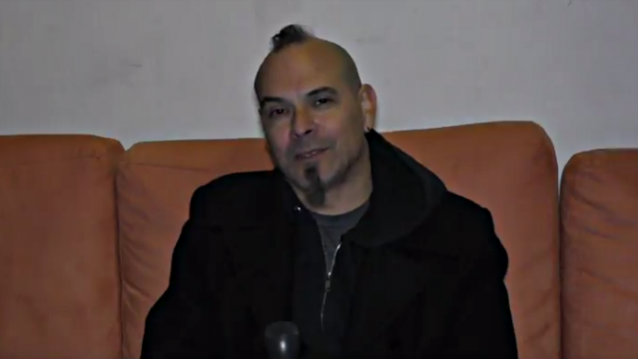 In a brand new interview with Austria's Stormbringer, ARMORED SAINT and FATES WARNING bassist Joey Vera was asked if it's true that he was approached by METALLICA to join the latter band after Cliff Burton was killed in a bus crash in 1986. Vera responded (see video below): "Well, the truth of that story is that after Cliff passed away, the band went into auditioning mode and auditioned a bunch of people. It was basically a cattle call — they had just so many people sending in tapes and trying to get auditions and stuff. And they started seeing a lot of people. And I think they were still just mourning their friend, obviously, and it was a super-miserable time for them on a lot of levels. And I think they got to a point where they just wanted to reach out to people that they knew, people they were friends with, and they started doing that. They made several calls, and Lars [Ulrich, METALLICA drummer] called me; I was one of the calls. They never asked me to join; they just said, 'Hey…' They told me the story, which I just repeated to you. 'It's not going well. We wanna reach out to people we know. Would you consider coming up and jamming with us?' I was very honored to get that phone call. I said, 'Let me think about it overnight, and I'll let you know in the morning.'"

He continued: "At that time, ARMORED SAINT was, basically, in the middle of recording 'Raising Fear', our third record with Chrysalis, so it was a strange time in my life to think I could accept an offer like that. I wasn't ready to leave ARMORED SAINT, I wasn't thinking about quitting, it wasn't like I was necessarily unhappy with the band and looking for an out or anything. So it kind of struck me… I had to think about what would my reasoning be to even go there to jam with them. And I'd have to go with the intention of wanting to get that gig. So I just came to terms with the fact that I wasn't ready to make that change in my life. So I kindly called Lars back and kindly declined the offer to come up and jam. And he was totally cool with it. He totally understood."

Vera added that he had no regrets about turning down an opportunity to audition for one of the biggest heavy metal bands in the world. "Those things happen for a reason," he said. "I've had a super-charmed life, and I think that for the reasons I made choices in my life, those are the reasons that have made me the person that I am, which I would not change for anything in the world.

"Some people, when we talk about this [thing], the next question is, 'Do you regret not doing that?' But, without hesitation, I say 'no,' because I wouldn't be who I am today, and I'm very happy with who I am, so… that's that."

In the fall of 1986, Jason Newsted became METALLICA's third bassist, following Ron McGovney and Burton. Robert Trujillo took over in 2003 after Newsted's exit.

The band's seventh studio LP, "Win Hands Down", came out in June 2016 in North America via Metal Blade.