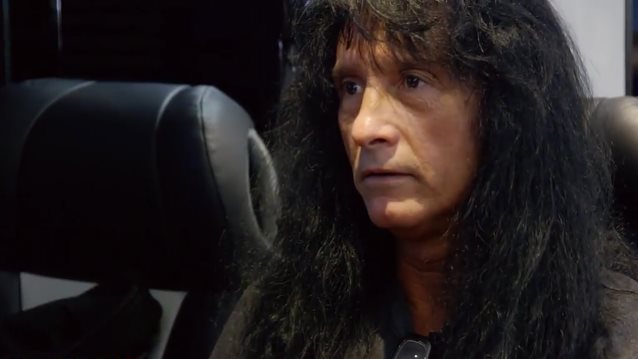 Metal On Loud recently conducted an interview with ANTHRAX singer Joey Belladonna. You can now watch the chat below. A couple of excerpts follow (transcribed by BLABBERMOUTH.NET).

Metal On Loud: You've been around for ANTHRAX's biggest successes, like [the "Among The Living" album]. It has really big hits on it. Yet you've been out of the band for eighteen years. How do you look back at your departure from ANTHRAX, that period?

Metal On Loud: How do you look back at that [entire] period [when you were out of ANTHRAX]?

Joey: "You know what? I was on my own. There's nothing like being on your own after being in a band. You just don't have all that to rely on. [I had] barely any assistance that came along with me, like it was gonna be, like,'No problem.' I wasn't gonna turn into Phil Collins overnight, you know? It just doesn't work. You know what? I was okay. I was sad to see that thing [happen]. I don't know what they were really going for; they were going for some nineties style, and apparently I wasn't the guy or something. That's all I can think of. That's enough for me to realize that, what do you do? You don't beg your way back in. So I just maintained playing music, as I do all the time. So I haven't stopped."

Joey: "It seemed good. I don't know. If I was to compare it, I didn't hear anything that we were doing that wasn't as good [as what they ended up doing with replacement singer John Bush]. I didn't hear anything that blew me away. I thought the music end of it was good, John's decent, but just the overall thing… I think we had something cool there, and I didn't hear that [in the music they made with John]. But that wasn't meaning it wasn't good; it just wasn't my idea of better, being better about it. It was just different, you know? I enjoyed the style that they were trying to dig into. I think they kind of straightened it all out a little bit, but it wasn't as thrashy in some ways sometimes too. I don't know. It gets crazy after a while when you're trying to explain it all. It's, like, it was what it was, you know?"

Metal On Loud: After the 2005 reunion tour, we had to wait for five more years to see you rejoin the band. Was it a hard decision to make [to return to the group]?

Joey: "No, that was the weird thing again. They got someone else [Dan Nelson] for a little while. If I only knew what was going through anybody's head... I mean, you're talking about somebody that no one even knew or even was experienced or something like that. It was kind of out of my hands, you know?"

Metal On Loud: I tried to figure out what was happening at that time.

Metal On Loud: I think I read somewhere it had to do with your indecisiveness.

Joey: "No, there was no indecisiveness [on my part]. I was there. I wouldn't have come back in the first place, and again, you know? I don't know why they would have said [that it had to do with my indecisiveness]. I had no reason to do that. They got another guy. I mean, it was really quick. It was too quick. It was almost like you've been dating and I didn't know about it — that kind of thing. It was too quick. Too quick."