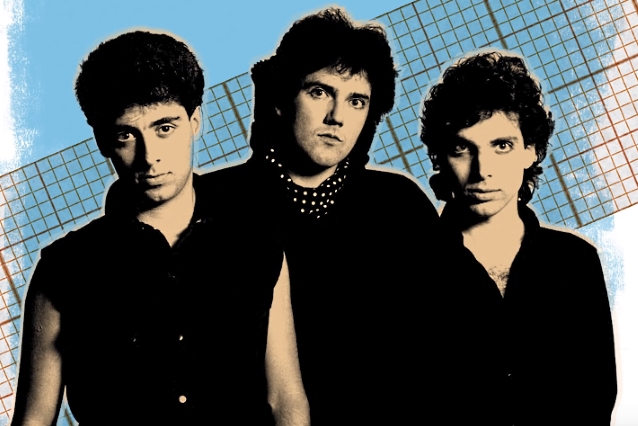 A collection of previously unreleased demos by Joe Satriani's first band, THE SQUARES, will be made available on July 12 via his own Strange Beautiful Music imprint.

The official music video for the song "So Used Up" from "Best Of The Early '80s Demos" can be seen below. The clip was directed by Satriani's son ZZ.

Says Joe: "'So Used Up' is one of the more unusual and progressive SQUARES songs, with lyrics that are a bit darker than our usual upbeat message. I still find the guitar arrangement unique and intriguing, and it’s one of my favorites to play."

THE SQUARES featured Andy Milton, who passed away in 1999, on bass and vocals, Jeff Campitelli on drums and, of course, Satriani on guitar.

"In Berkeley, California back in the late '70s, my then-brother-in-law Neil Sheehan and I decided to start a band," Satriani said. "It would be a power pop trio with me on guitar and Neil managing and writing lyrics. We sought out a drummer and a frontman/bassist, and in December of '79 we found them playing on the local Bay Area scene.

"Our lead vocalist/bassist Andy Milton was from Cleveland, Ohio. He was 6 feet tall, good looking and had a voice like a modern-day Elvis.

"Our drummer Jeff Campitelli was fresh out of high school. A local phenom who could groove like Charlie Watts but with a new ferocious energy that would help propel the band into the burgeoning New Wave music scene.

"We called ourselves THE SQUARES, or sometimes just SQUARES. There were other bands with the same name but we were determined to get to home base first and claim the name. That never happened. We were part VAN HALEN and part EVERLY BROTHERS. A mix of heavy metal, rock 'n' roll, punk and new wave. We were hard to pin down and categorize, which is most likely why we never 'made it.'

"But as we were trying our best to get a record deal and become superstars, we had a lot of good times, and we laid down some seriously good music. We were ahead of our time, which, in this case, is another way of saying we were out of step with what people were looking for back then.

"Ultimately, I left the band I started to pursue a solo career. It was gut\-wrenching to walk away from something I put all my heart and soul into, but, as it turned out, it was the right thing to do."

The demos on "Best Of The Early '80s Demos" were recorded and mixed by the band's then-sound engineer John Cuniberti. The recordings have now been restored, digitized and remixed by Cuniberti.

"We've restored the original recordings, brought them into the digital world, and with loving hands and ears, John has remixed the best of what we did in the studio," Satriani said. "They sound better than ever. John was careful to preserve the band's original intent with regards to song arrangements, sound and vibe, and in some cases, extremely creative mix ideas.