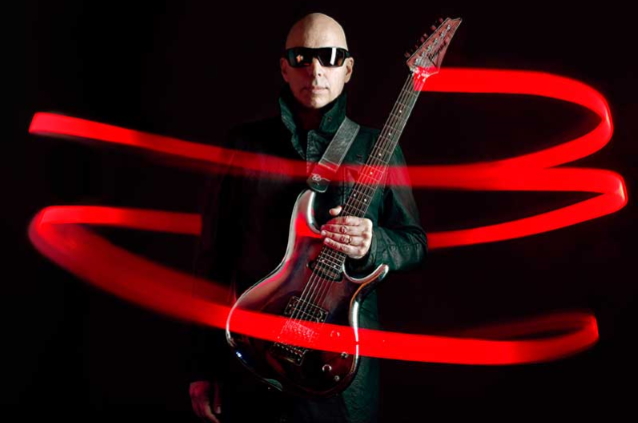 Joe Satriani is ready to kick off the new decade with a new album and world tour. Set for release this spring, "Shapeshifting" marks the legendary guitarist's 18th studio album in his nearly 35-year career in music. More details on the new album to come shortly.

As previously announced, "The Shapeshifting Tour" opens on April 15 with a 42 date European leg beginning in Germany and winding up with a trio of mid-June shows in Spain with more dates to be announced soon. The set list for the live show will feature tracks from the new "Shapeshifting" album in addition to many of his classic fan favorites, including "Surfing With The Alien", "Always with Me, Always With You" and "Flying In A Blue Dream". The 2020 touring band features celebrated drummer Kenny Aronoff (JOHN FOGERTY), bassist Bryan Beller (ARISTOCRATS) and keyboardist Rai Thistlethwayte (THIRSTY MERC) joining Satriani on guitar.

On January 15, Satriani will be inducted into the 2020 Metal Hall Of Fame by his friend and former guitar student Steve Vai. The ceremony, hosted by television and radio personality Eddie Trunk, will take place during a non-profit charity gala whose proceeds go to bringing free drum therapy services to special needs children at specific health facilities and community centers throughout the United States.

On January 16, Joe and Trunk will meet up again, this time at Los Angeles's famous Rainbow Bar & Grill on Sunset Blvd. for Trunk's monthly "LA Invasion" show airing live on SiriusXM 106 Volume channel. The show will air live from 7 p.m. to 9 p.m. PT and replay Friday from 2 p.m. to 4 p.m. ET and 10 p.m. to midnight p.m. ET. It will also be available on the SiriusXM app.

In other Satriani music-related news, two sets of Joe's music have now been added to streaming platforms. "Additional Creations And Bonus Tracks", featuring alternate versions of four songs from his "Engines Of Creation" album along with 12 other various bonus tracks join a newly released deluxe edition of his classic 1987 album, "Surfing With The Alien (Deluxe Edition)", which arrived late last year featuring new artwork and a bonus disc, "Stripped - The Backing Tracks". The latter, launched as a limited run for Black Friday's Record Store Day in November, features the songs from the album with all guitar solos removed. The set also features new artwork with Satriani's guitar replacing the iconic Silver Surfer on the cover.

Satriani said: "Seeing my chrome guitar bursting through a multicolor wormhole seems quite fitting. It's as if it always belonged there."

Since 1987, Satriani's platinum, dual-Grammy-nominated album "Surfing With The Alien" has established him as a legend in the music world for over 30 years. Satriani explained his decision to make the stripped version, after years of reluctance for such a work: "When I build a track from scratch, it's a kind of musical alchemy, a mixture of voodoo, mojo, blood, sweat, tears, prayers… and a lot of hard work. I cherish them because of this... it's no wonder I've been reluctant to release them (stripped)." Now he is truly excited about giving this new and exciting versions of his music to the fans, saying: "You can play along with these tracks or just sit back and enjoy the mixes as they are."

For two decades, the guitar virtuoso has traveled the world, playing to sold-out crowds as both a headliner and as founder of the all-star "G3" guitar extravaganza. Satriani's studio and live recordings have sold more than 10 million copies worldwide to date and of his many solo albums, two have gone platinum and four others went gold, with 15 Grammy nominations between them. His side project CHICKENFOOT, featuring former VAN HALEN frontman Sammy Hagar, former VAN HALEN bassist Michael Anthony and RED HOT CHILI PEPPERS drummer Chad Smith, saw its debut album certified gold and their second studio album debut at No. 9.