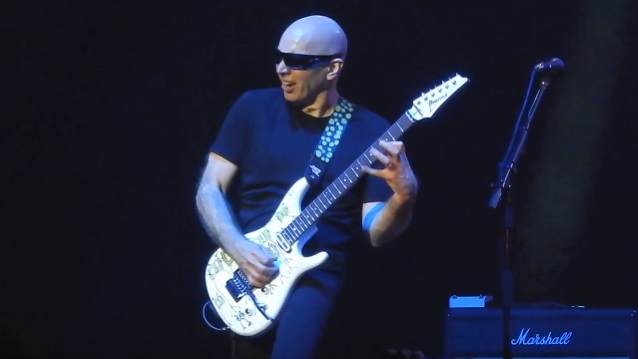 Guitar virtuoso Joe Satriani says his long-running "G3" tour was created because success had isolated him from his fellow musicians. The tour, which launched in 1996 with Satriani along with Eric Johnson and Steve Vai, has since showcased some of rock's best guitarists, including John Petrucci (DREAM THEATER), Steve Morse (DEEP PURPLE), Yngwie Malmsteen, Paul Gilbert, Robert Fripp and Steve Lukather. The 2018 installment, which features Satriani, Petrucci and Phil Collen (DEF LEPPARD), kicked off January 11 in Seattle, Washington.

In a recent interview with Dominic "Zakk" Zaccagnini of San Francisco radio station 107.7 The Bone, Satriani was asked whether he thought, when he launched "G3" more than two decades ago, the tour would last this long. "Yeah, absolutely," he said (see video below). "I'll tell you what: The whole thing started with me being frustrated that success had isolated me from everybody, all my friends who are musicians.

"I always thought as a kid, when you are a successful musician, a rock star, you'd be hanging out in a place like this with all of your friends, partying, playing guitar, just talking about your next record, your next tour, but in fact, the opposite was happening," he explained. "I'd always be in another country, another city and all of my friends were in some other country, some other city and I'd be stuck in a hotel room or playing the same 20 songs every night on the stage somewhere. So, I thought, 'Well, this isn't any good. This is making me sort of less social as a guitarist.' I came back [to Northern California], home, and I had a really good afternoon meeting with the guys at Bill Graham Management, not too far from here. I said, 'What can we do to sort of formalize me jamming with all my friends?' It was just a crazy idea. Like, 'What could we do? Could we start a club? Do we go to where they are?' We just entertained every crazy notion, then after a few hours, it was, 'Okay, we can do our own festival, but it can't be like Lollapalooza or something huge. It has to be something manageable.' And we worked it all the way down to three.

"The reason why it was three because if it was six, let's say it was six of us that would play every night, everyone would wind up playing maybe 15 minutes," he continued. "It was difficult for me to attract someone like Steve Vai saying, 'You get to play for 15 minutes. How about that?' He was, like, 'Well, I get to play two hours on my own.' We structured it around three so everyone got about an hour to play. They could go out, promote their new album, they could do whatever it is they wanted to do, put on their full show, then we would be able to get together at the end of the night and still play for a good half hour in a jamming format and still make it out of the venue. Now, the reason why that's important, because let's say if you're playing the Beacon Theatre in New York City and if you go over, and I mean like one second over curfew, it's something like eight thousand dollars a minute. And they don't fool around in New York City when it comes to that. It was very important to fit the show within the curfew and this is even before we got the artistic part."

Satriani then went on to explain the effort it took to not only convince artist managers the tour was worth doing, but also promoters, many of whom by the mid-'90s were averse to booking guitar-centric shows in the wake of alternative and grunge music. "We were talking about this earlier about how it took a year," he said. "So, this is 1995. It took a year to convince other artists and their managers that it was a good thing for three guitar players who could outplay each other to stand next to each other every night. Every manager said, 'I don't want my artist looking bad in front of somebody on any given night.' My idea was this: Basically, if I was in the audience, I wouldn't care. If Jeff Beck and Eric Clapton and Jimi Hendrix showed up to play, I'd just be so overjoyed. There's nothing anybody could do that could make me stop my allegiance to one player and switch teams. If that's how the audience feels, then why don't we just get together and play and celebrate us being guitar players, us loving guitar music. Let's pick songs that everybody knows and we'll all have a good time. The audience and the musicians will sort of come together during that jam session. After almost 12 months of convincing, I finally got Steve Vai and Eric Johnson to say yes. That's why it took until '96 to get it off the ground."

Even after Satriani got "G3" off the ground, it still took several years and tour iterations before he could fully convince promoters the tour was worth booking and would not lose money. He was also faced with the issue of finding the right mix of guitarists who could co-exist on the road and on stage.

"Here's the thing: You might be able to imagine this, it's easy for me to sit here and say 'I got a great idea," said Joe. "All of us are going to go on tour and it's going to be great and we can play wherever we want.' And obviously that will never happen. Let's say if I'm in charge of this thing, we can only play wherever we are invited. Who invites us to these places? It's local promoters. That means you have to go to the local promoter and say 'I got this idea. I got these 50 people, nobody knows who they are and we're all going to show up and play.' And the promoter says, 'No, thank you. It looks like I'm going to lose money that night.' In other words, I have to sell the idea to the promoters around the world in different territories in, let's say, North America. We would come up with ideas, maybe six, seven different 'G3' ideas and with multiple different partners, and then we would float the ideas out and it would take six months for promoters to get back to us with their opinion about whether or not they thought it was worth their financial risk to invite us to support the show. That's sort of part of the music business that we don't really talk about. That's really what it is. Musicians have to be invited by promoters to go on tour. That's where the commerce helps the art. Sometimes I'd come up with these great ideas and the promoters would say, 'Sorry. Don't like that guy. He trashed the dressing room last time.' Or whatever reputation [issues]. They don't think they're popular enough, but whatever. We have that to deal with. Then there's the personalities, where, in my innocent point of view, I think 'I'll just get this person and this person and it will be exciting.' Then I find out the two of them don't like each other. So, there's that, too. We've faced everything, but still, what keeps it going, I think, is I'm just like everybody here. I'm in the audience thinking, 'Wouldn't it be great if they would just drop their guard and just get onstage and play together?' That's the most exciting thing when you're in the audience, so let's make that the show."

Satriani's 16th solo album, "What Happens Next", was released on January 12 via Sony/Legacy Recordings. The album sees Satriani once again team with producer/engineer/mixer Mike Fraser, his frequent collaborator over the last 20 years. Fraser is well known for recording/mixing every AC/DC album since 1990's "The Razors Edge" along with his classic works with Satriani going back to the release of "Crystal Planet" in 1998.