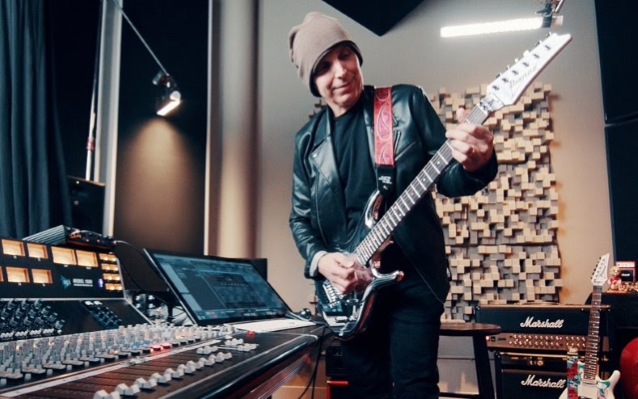 IK Multimedia has welcomed legendary guitarist Joe Satriani to its family of artists. A long-time IK user, Satriani enthuses: "I'm happy to be working with IK Multimedia. I've used AmpliTube software at home, in the studio and on several albums. And now, the AXE I/O ups my game in the studio", referring to IK's new audio interface which offers a wealth of powerful features for the recording guitarist.

Satriani shares his thoughts on digital recording and how AXE I/O can play an important role, noting: "When I saw this, I thought, 'Oh, wow. This is great. I know exactly how I'm going to use this.' What guitar players really want is to see a clear place to plug in. They want control over the gain of the input and the nature of the input in itself. This [AXE I/O] is actually affording the guitar player all those things and you've got those extra controls that you can play with the impedance in a way that would mimic the difference between a vintage strat and a brand new guitar."

IK is excited to partner with Satriani, first on a series of videos sharing Joe's extensive expertise in recording guitar, and later on more formal collaborations to help guitarists get the most out of their playing and recording experience. The addition of Satriani further expands a roster of guitar icons that includes Slash, "Dimebag" Darrell Abbott and Jimi Hendrix, as well as legendary brand partners like Fender, Ampeg, Mesa/Boogie, Orange and more, that make IK's AmpliTube brand unique in the industry.

Inspired by the new relationship and Satriani's personal recording process, IK Multimedia also announces a firmware update to AXE I/O, improving its onboard Amp Out feature that eliminates the need for a DI box during the re-amplification process. For a more convenient experience for guitarists, AXE I/O's software control panel now features a "To Amp Out" button that routes the Instrument Input 1 directly to the Amp Out with zero latency so guitarists can easily record both a clean DI signal and their amplifier simultaneously, without the need for splitters or other external gear.

In the video below, Satriani explains some of his recording philosophy, the importance of finding just the right tone for a particular recording, and some ways tools like AXE I/O and AmpliTube can help make the recording process much more productive and satisfying.