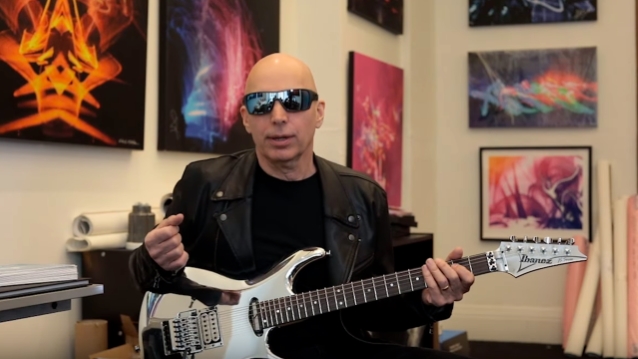 This summer, guitar legend Joe Satriani will unveil an art collection crafted from a new medium in artwork, guitar performance.

Working with acclaimed art team SceneFour, the guitarist has built visuals for canvas based on the movement of his fingers on the frets. The result is an astonishing collection of artworks that showcase the unique style of the guitarist in a visual form.

In the short documentary below, Joe discusses the role artwork has served in his life and the upcoming art collection.

Join the interest list to get exclusive information on the release and access to see the collection before the public.

15-time Grammy Award nominee, Satriani is notable for being the biggest-selling instrumental rock guitarist of all time. After coming to the forefront with the release of his 1987 solo album "Surfing With The Alien", he has worked with Mick Jagger, DEEP PURPLE, Alice Cooper, BLUE ÖYSTER CULT and the fabled SPINAL TAP and is a member of rock super group CHICKENFOOT.

Satriani's most recent solo album, "What Happens Next", was released in January 2018 via Sony Music. The record saw the legendary guitarist performing alongside drummer Chad Smith and bassist Glenn Hughes.

"The Best Of The Early '80s Demos", an anthology of unreleased songs by Satriani's first band THE SQUARES, will be released in July via his own Strange Beautiful Music imprint.