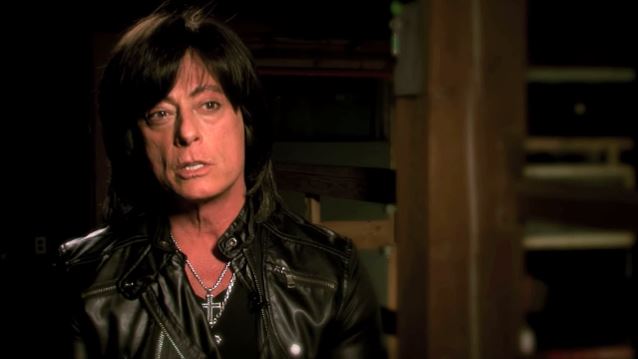 Former RAINBOW and DEEP PURPLE singer Joe Lynn Turner has once again commented on Ritchie Blackmore's decision to go out and perform the two bands' classic material with a new group musicians instead of reforming RAINBOW with a more "authentic" lineup.

Ritchie last year surprised everyone by telling a French newspaper that he was contemplating a return to rock music but excluding Turner from the project. "I think that Joe will not be part of the adventure, and he doesn't know it yet," Ritchie said. "He does his thing, I like him, and I made good albums and good songs with him, like 'Street Of Dreams'." The guitarist has since recruited LORDS OF BLACK vocalist Ronnie Romero, STRATOVARIUS keyboardist Jens Johansson, BLACKMORE'S NIGHT drummer David Keith and bassist Bob Nouveau to accompany him at the upcoming shows.

Now in a brand new interview with Greece's Rock Overdose, Turner slammed his former bandmate, insisting that he was "betrayed" by Ritchie and blaming the guitarist for wasting his time trying to make an "authentic RAINBOW reunion" happen.

Turner said: "I'll tell you what happened…. A very short story. For over a year, I was talking with [Ritchie's] management, and we wanted to have big plans to have an authentic RAINBOW reunion — authentic, meaning with the integrity of the ex-members, with the material, with Doogie [White], Graham [Bonnet], everybody singing, everybody playing. This is what the fans really deserve to see — not what he is doing now, [which] I believe is a cover band. And we wanted… I wanted only to be involved if this was the situation. So when he started to back off of that situation, I just backed off of the whole thing myself and said: 'You know what? If you really want to do this, I am not gonna be involved with it,' because, for me, it's a very… How do you say the word? It's a cheap way of bringing it out. And I don't think the fans deserve it. I think it's a shame that he has to feel this way. So, to make this story short, I just said, 'Look, I'm not involved.' And then he had come with a comment in the Le Parisien newspaper that 'Joe Lynn Turner is not involved and he doesn't know it yet.' Well, I knew it, and it was a classless and very thoughtless way for him to announce that to the world. So I don't respect that very much; I don't think anyone should respect that. But that's his problem."

Despite the fact that he is not involved in Blackmore's return to rock, Turner says that he is "not angry about anything; I just feel that I wasted my time in trying to make an authentic RAINBOW reunion happen, and I was betrayed. So the fact of the matter, really, is that I wouldn't wanna do it any other way. I think it's just… what he's doing now, like I said, it's a cover band, you know. I don't know why he calls it RAINBOW, 'cause it's not RAINBOW, you know. And, to me, he doesn't give anything, really, to the fans. Of course, you go see Ritchie play, but so what? That's it. And I think a guitarist of his stature — he's an icon, he's brilliant, etc. – he sort of had the best way possible to return to some rock and roll. And I don't think he's making a good decision by doing this. But, you know, that's all I can say about it. Ritchie has the right to do what he wants. But I think he's making a mistake in so doing."

According to Joe, Ritchie's announcement that he was going back to playing rock music again has given him a sense of vindication for anyone doubting that he was really part of the RAINBOW reunion talks. He said: "Most of the people [were] saying that I was crazy, I was delusional, I didn't know what I was talking about… I kept talking about his return to rock, and they'd laugh at me. And I was upset about it, but at the same time, I'm not anymore, because I realize that I was telling the truth, I did know what I was talking about, I said what I was talking about. Whether I was involved or not, it's not important. But people should realize, 'Hey, at least Turner said the truth.' And I always say the truth. And what I tell you here today is the truth. I wanted authentic RAINBOW — not this. So good luck, Ritchie. I wish you well."

Turner also spoke about DEEP PURPLE's upcoming induction into the Rock And Roll Hall Of Fame and the controversy surrounding Blackmore's decision to sit out the ceremony because the current touring configuration of the band refuses to perform with the guitarist at the event. Joe said: "[Ritchie is] not allowed, actually, to come to the Rock And Roll Hall Of Fame. Because if he comes, Ian Gillan won't come, and the rest of PURPLE won't come. And if you ask me, they're all acting like children, and it's a mess, and it's a shame, and it's terrible for this to happen. But, you know, for me, it shows you exactly what's happening over there — that these people don't know how to grow up and just shake hands and be friends; you know, just stop all the bullshit. And it's a shame; it's making a big circus out of the whole thing. So… I'm gonna be on tour anyway; I'll be in South America for the whole month of April, so I have no problem about what the situation is."

He continued: "I made a statement on my Facebook that describes how I feel [about] the Rock And Roll Hall Of Shame, as I call it. I spoke with ['That Metal Show' co-host] Eddie Trunk about it on [his] radio show the other night, and he happens to agree with me. He said these people are clueless; they have no idea of who's who whatsoever. It's just a Hollywood cabal, it's a Hollywood event, and it really doesn't have much to do with rock and roll anymore; it's more of a celebrity event. In the early days, it was a true, honest… shall we say… organization. But now? I think Rock And Roll Hall Of Fame has turned into a kind of a circus show. It's more like the Grammys or something stupid like that. People make the band, and I'm more concerned with the fans and the people. That's who makes the choices, not these organizations. It took them how long to make DEEP PURPLE in the Rock And Roll Hall Of Fame? They should have been in the Hall Of Fame twenty-five years ago."

It should be noted that Gillan has insisted that he has no problems with Blackmore attending the Rock Hall ceremony and has said that he is not opposed to sharing the stage with the guitarist at the event. "We would love to perform with Ritchie, David [Coverdale], Glenn [Hughes] et al on 'Smoke On The Water' in the encore jam," Ian said.