By leveraging its iconic past and leaning into the innovative future, Gibson, the legitimate leader in professional instruments proudly presents the Joan Jett ES-339 in Wine Red. Calling on nearly two years of touring research and development with Joan, the signature Joan Jett ES-339 guitar premieres as Gibson approaches the next era of shaping sound for past, present and future generations.

Jett is an icon for all that is righteous in rock 'n' roll. From her pioneering spirit, to her visionary outlook on what it means to be an artist, Joan continues to inspire human beings from all walks of life. The new Joan Jett ES-339 guitar features a thermally engineered chambered maple centerblock and thermally engineered Adirondack Spruce bracing, a radical first for Gibson ES guitars. The control assembly is hand-wired with Orange Drop capacitors and is paired with our Burstbucker 2 and Burstbucker 3 humbucking pickups. From sweet to rude, the tonal capabilities of the Joan Jett ES-339 guitar are truly limitless. The stunning AAA figured maple veneers are finished in Wine Red for a look that will always make a statement. The Joan Jett ES-339 will be produced in a very limited run of only 150 guitars available worldwide, with the first 50 hand-signed by Joan. Each instrument will come with a Gibson Joan Jett Signature hardshell case and custom Joan Jett certificate of authenticity.

"I have witnessed first-hand the love and personal handcrafting that goes into each of these guitars," explains Jett. "I'm so very proud my signature 339 is one of the last designed and produced in Memphis and amongst the first from Gibson Nashville."

Since co-founding THE RUNAWAYS, the pioneering all-girl punk quintet, at age 15, Jett's determination and drive have kept her in the public eye. Jett was able to see her story told in "The Runaways", the film based on (lead singer of THE RUNAWAYS) Cherie Currie's book "Neon Angel" starring Kristen Stewart as Jett, and her fellow A-lister Dakota Fanning as Currie. Jett was close to the project: She served as an executive producer. Jett and THE BLACKHEARTS released their latest record, "Unvarnished", in 2013 and continue touring the globe to throngs of adoring fans.

Jett has spent her lifetime breaking barriers and challenging expectations — this is, after all, a woman who is both a spokesperson for PETA and a devoted supporter of the U.S. military. She's fought hard for all of her historic accomplishments, yet she remains humble and appreciative.

"I've had a blessed career," she says. "I consider myself so lucky to have been able to do things my own way." 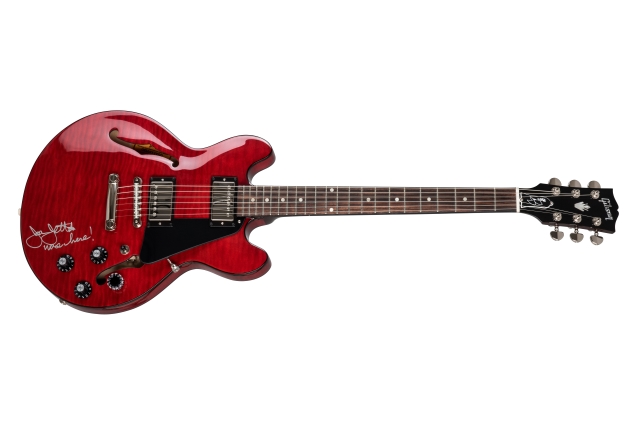