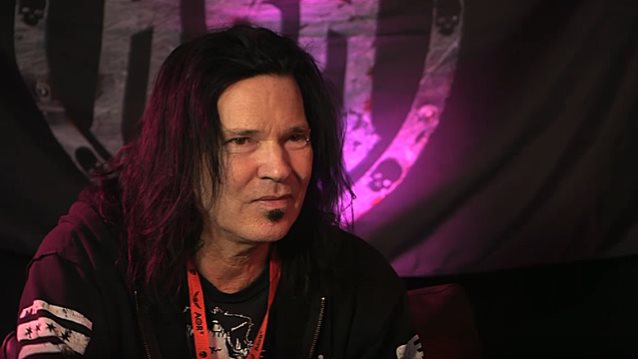 Former LOVE/HATE and QUIET RIOT singer Jizzy Pearl has commenced work on a new solo album, to be released via Frontiers Music Srl. "I'm having one of my ex-LOVE/HATE guitar players, Darren Householder, he's gonna be playing guitar on it," Jizzy told HRH TV at this year's HRH AOR festival, which was held last month in North Wales. "So it's gonna be LOVE/HATE-ish."

Asked what fans can expect from his forthcoming solo disc, Jizzy told Uber Rock: "I write about things, recent experiences, people around me, some not so affectionately. I'd like to think I’m a little past writing about beer and chicks — unless it's about my wife, who is a cool chick."

Pearl recently celebrated the 25th anniversary of LOVE/HATE's "Wasted In America" album by performing the LP in its entirety on a U.K. tour.

Jizzy told The Moshville Times about his current setlist: "I do throw in some Jizzy solo songs in from time to time, but, to be honest, people want to hear the first two LOVE/HATE records sung by the guy who can still sing them."

Pearl announced his exit from QUIET RIOT last October after about three years fronting the band. He told NI Rocks about his departure: "I just wanted to move on. I just wanted to do more work of my own, including my own record, and wanted to explore other options in the musical sphere."