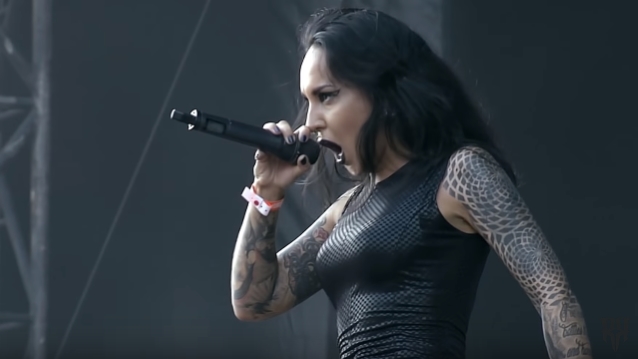 JINJER frontwoman Tatiana Shmailyuk, who possesses one of the most powerful and diverse voices on the planet, says that she has no interest in getting involved in vocal coaching at any point in the future. "No, never," she told EMP UK in a recent interview (see video below). "I don't see myself being a teacher, for example, of anything — although I have a diploma of teacher, but that's why I don't work there in school. Because now I realize that I don't know much — basically, I don't know anything. And I cannot pretend that I am a fucking professor and teach someone…"

She continued: "That was hard for me — to learn how to growl, for example. And I developed this technique by myself for myself. And come on — I won't teach you my own technique, because it probably won't suit you. It is time consuming, for example — it can take years and years. And then, in the end, we realize together that that was all in vain and a waste of time. This is the first thing. And the second thing is I have no energy for that — I have no energy and I have no patience. And plus, I'm an introvert — I don't like talking to people much. It's no-no for me."

In a 2018 interview with Devolution, Tatiana stated about her singing style: "I'm still working on it. I still try to cultivate more techniques or whatever… It took me, like, less than 15 years … of constant racing after this technique. I don't know. I don't take care of my voice at all. Yes, as you can see, I smoke, a lot — I'm a heavy smoker. And yeah, maybe that helps, actually."

In a separate chat with Switchbitch Noise, Tatiana said that she spent a long time perfecting the way she switches back and forth between singing and screaming. "It's hard to explain in words because it really comes from your mind," she said. "I call it the 'technique of two throats.' [Laughs] One throat is growling and screaming and stuff like that, and another one just stays clear, you know, clean. I don't really know how to explain. It took me awhile to train the skill. And sometimes I might even lose the skill and I get so frustrated sometimes, like, 'Oh my God, where is it? It was there yesterday, but now it's gone.' [Laughs] So, I think it's still being developed."

JINJER will return to North America in the spring. The trek, dubbed the "Tour Of Consciousness", will feature support from SUICIDE SILENCE and TOOTHGRINDER. The tour will begin on April 23 in San Francisco, California and will come to an end in Denver, Colorado on May 23. Additionally, the tour will include stops at massive festivals such as Sonic Temple and Epicenter.