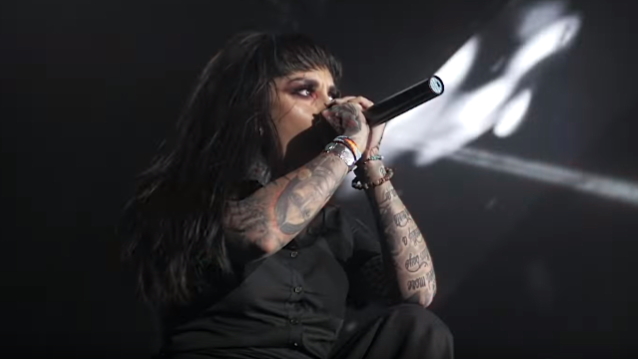 Ukrainian modern metallers JINJER have released the official live video for the song "Pit Of Consciousness" from their latest album "Macro". The clip was filmed by Oleg Rooz (SUICIDAL TENDENCIES, THE DILLINGER ESCAPE PLAN, ENTER SHIKARI) during the band's captivating 2019 performance in Kiev.

Commented bass player Eugene Abdukhanov: "Back when we recorded this show, we were on the tail end of a six-month tour, and somewhere in between all that madness, we managed to write and record 'Macro'... It was an extremely stressful time. But it was one of the most positive times of our lives.

"Things right now look pretty grim and no one knows what will happen next.

"We want to release this video with the hopes of letting people know that no matter how crazy, confusing and scary things get — BETTER TIMES are on the way.

"Macro" was released in October via Napalm Records. Punishing riffs, aggressively blended vocals and astonishingly deep lyrics make "Macro" JINJER's most advanced and undeniable album yet — taking the listener on a journey of trauma, power struggle and greed with a progressive groove metal backdrop.

While January 2019's "Micro" EP proved to be a short exercise in madness and technical brilliance, fans still weren't prepared for what JINJER had in store with the absolutely unbridled "Macro". Defying all boundaries, the aptly titled opening track "On The Top" features the band's eclectic trademarks and obeys one law only — their own. Frontwoman Tatiana Shmaylyuk defines the unique character of the Ukrainian act with menacing whispers, enthralling clean vocals and brutal growls whilst lethally groovy riff cascades melt into twisted songwriting. There is space for a microscopic bit of reggae "Judgement (& Punishment)" in all the heaviness, the double bass is beautifully out of control on "Pausing Death", and technically superior tracks like "Home Back" defy gravity.