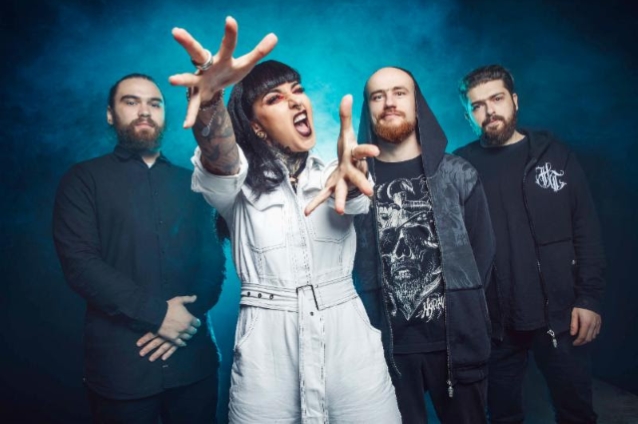 Ukranian metal juggernauts JINJER have completed recording the follow-up to their 2019 EP "Micro". Tentatively due in the fall, the disc was laid down at the Kaska Studio in Kiev with producer Max Morton, who previously worked with JINJER on "Micro" as well as the acclaimed albums "Cloud Factory" and "King Of Everything".

During an interview at this past weekend's Download festival in the U.K., JINJER bassist Eugene Abdiukhanov told Metal Wani about the upcoming LP: "The recording is done. Just the day before yesterday, Tatiana [Shmailyuk] recorded vocals for the last song. And now all instruments, all lines, everything is recorded, so it's all about mixing and mastering."

According to Abdiukhanov, it is "wrong" to call "Micro" the follow-up to 2016's "King Of Everything". He explained: "I would say that 'Micro' is an independent release and quite different from its predecessor, from 'King Of Everything'. And this [new] record, which is going to be out this year, this is a sort of successor to 'Micro'. This is something similar, but at the same time different. There is a certain thread which keeps going from 'Micro' to the upcoming album, something which connects these two."

JINJER will return to North America this fall on a headline tour. Due to overwhelming demand, JINJER will upgrade to bigger venues in Mesa, Montreal, Toronto, Indianapolis and Albuquerque to allow more fans to attend. There has also been one more show added on October 27 in Minneapolis at the Turf Club.