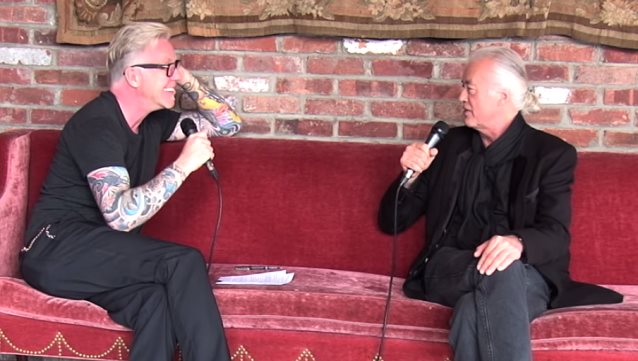 Legends Of Classic Rock's Jeff Woods recently sat down with LED ZEPPELIN guitarist Jimmy Page to talk about the upcoming expanded and remastered reissues of the band's first three albums. You can now watch the chat in five parts below.

* Remastered album on CD in vinyl replica sleeve.
* Companion audio on CD in a new sleeve and on 180-gram vinyl ("Led Zeppelin" features a previously unreleased October 1969 concert from Paris; "II" and "III" feature previously unreleased studio outtakes).
* Remastered album on 180-gram vinyl in a sleeve replicating the first pressing.
* High-def audio download card of all content at 96kHz/24 bit (Live tracks are 48kHz/24bit).
* Hard-bound, 70-plus-page book filled with rare and previously unseen photos and memorabilia.
* High-quality print of the original album cover, the first 30,000 of which will be individually numbered.
* "Led Zeppelin" will also include a replica of the band's original Atlantic press kit.

Set for release in October is Jimmy Page's self-titled photographic memoir. The book was first printed in 2010 as a limited edition of only 2,500 copies worldwide, and sold out within weeks of release, becoming the fastest-selling book in Genesis Publications' 40-year history.

Page has chosen every one of the 650 photographs, written the accompanying text, arranged the content into its narrative order and overseen the design of his book, offering insightful captions to the photos. Among the legendary rock photographers featured in "Jimmy Page By Jimmy Page" are Ross Halfin, Kate Simon, Gered Mankowitz, Dominique Tarle, Pennie Smith and Jim Marshall.