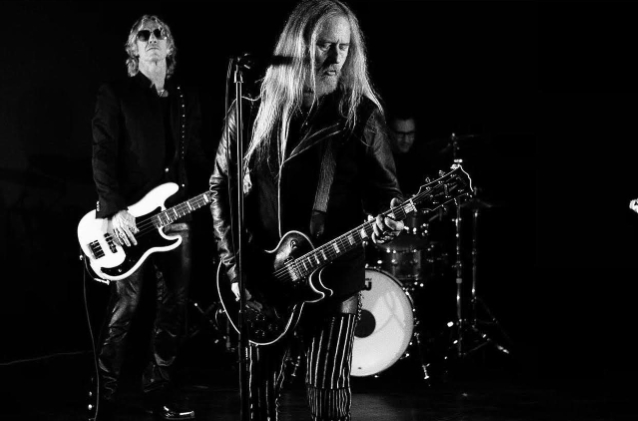 ALICE IN CHAINS guitarist/vocalist Jerry Cantrell has confirmed that he filmed a music video for a single from his upcoming solo album on Sunday (June 27) at a photo studio in Los Angeles. Backing him during the video shoot were GUNS N' ROSES bassist Duff McKagan, guitarist/vocalist Greg Puciato (THE DILLINGER ESCAPE PLAN) and drummer Gil Sharone.

"Here's a couple better pics than the ones leaked yesterday. May be time to upgrade that phone? Just saying," Cantrell captioned the Instagram post featuring two pictures from photographer and director Jim Louvau, who presumably helmed the new clip.

Cantrell's brother has said on social media that the album is due in October, although no label has been announced and no formal release date has been set.

Jerry's upcoming effort will mark his first full-length release since "Degradation Trip", the epic solo album he made in 2002 with future METALLICA bassist Robert Trujillo and FAITH NO MORE drummer Mike Bordin.

Jerry's career outside of ALICE IN CHAINS has consisted of two solo albums and contributions to major film soundtracks. Cantrell's first solo album, "Boggy Depot", was released in 1998, followed by his second album, the aforementioned "Degradation Trip". In addition to his solo artist work, Jerry has released music on soundtracks for several films, including "Spider-Man", "The Cable Guy", "John Wick 2", "Last Action Hero" and "The Punisher".

"[ALICE IN CHAINS] just finished touring in September [2019] off of 'Rainier Fog', and we generally take about a year off when we're done touring anyway — just give it a rest for a second and then get it reinvigorated and focus on what's new. So we're gonna take a year off, so I thought I'd maybe do some shows and I'm working on some music as well."