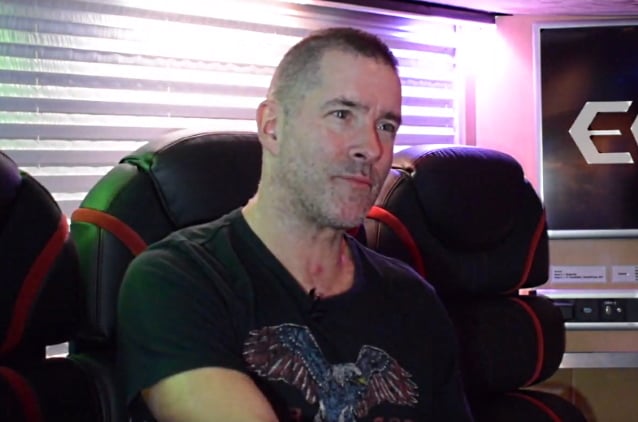 ANNIHILATOR guitarist Jeff Waters recently spoke with EMP España. The full conversation can be seen below. A few excerpts follow (as transcribed by BLABBERMOUTH.NET):

On how he feels about the band's 30-year career:

Jeff: "I feel old! [Laughs] In a short answer, I'm honored and happy that I have a small, little piece of being in heavy metal history with so many great bands from different countries and different types of metal music. I just think it's really cool that I'm in there — [that] I'm one of these many thousands of good metal bands.... [I've been] making a living at it for many years. It's been my only job — playing music — since I was a teenager, so you can't complain about that. A lot of people complain about things no matter who you are, and I love to complain sometimes. When there's no camera on, I always complain. But there's ups and downs in the music business. It's not easy today to make a living. I'm only making a living for many years because we have a lot of songs, and we have some underground, hardcore fans that keep staying with us. Not a big group like fans of SLAYER, [who] have millions — we don't have that success — but we have this smaller group of people that really like what we're doing. Being sober and taking care of business, a little bit taking care of my health and trying to be as honest as I can with people, and try to be [a] good person, and try to write honest heavy metal music that I like. Sometimes, you can write some great songs; sometimes, not so good; but you keep trying. I'm in a good position where if I die tomorrow, if something happened to me, you'd have to know that I'm very proud of all the people I've met and all the music I've made. I'm in a really good place now... I think in my band's case, there's so many reasons why we are where we are now. Some people will say, 'Why weren't you bigger?' Then people will go, 'Because you changed singers. You have different styles of music. Maybe some of your songs or CDs were not so good.' I think a lot of it is, I don't have the drive, the will [to play the game]. I don't give a shit about being on the covers of magazines. I like playing music. I like getting together with the guys and playing on stage. I like traveling; I like good food; I like meeting people. I don't care about covers of magazines. I don't care about selling millions and millions of records. It's not the driving force. My thing is just to survive and keep playing music, and when it's time to stop, then I'll stop... I'm really lucky now, because not many people get to write whatever they want, and even if sometimes the songs aren't that good, fans are going, 'Okay, well, maybe this wasn't the best ANNIHILATOR CD, but we'll wait for the next one and see if it's better.'"

On whether ANNIHILATOR can be considered a solo project:

Jeff: "I think generally, yes, it's mostly been a solo project behind the scenes with business and management and music and studio and writing. But when it comes to going on tour, the only thing I'm the boss of is the crew and the busing, like a manager kind of thing, trying to keep everybody doing their jobs. But musically, the band are the band. They're not my employees. Legally, yes — I pay them money — but we all just get along and have fun. It's no point in being too serious with the guys in the band. [They] are really good, [and] they've been with me — some of them up to five years now."

On why he's stayed the course:

Jeff: "Along the way in the last 30 years or so, there's been opportunities — musical or money opportunities or artistic or whatever. I've had offers to produce, to be the head of a team that produces the music for video games or writing songs for other people. I did that with Sony and publishing and Warner Chappell and wrote songs for other artists. There's all these cool things that I could have done, like maybe become a mix engineer, but that kind of thing — to be good at it [and do it as] a hobby is one thing, but make a career and be really good at it, that means you have to dedicate your life, 24 hours a day, to that work. To be a mix engineer means I should have stopped ANNIHILATOR. To play another kind of music, I'd have to stop ANNIHILATOR. I don't want to do something half-assed. I wouldn't want to do 50 percent effort with this and 50 percent effort with that. I kind of decided somewhere in the late 1990s, when I had many opportunities to join other, bigger bands, 'You know what? As long as I'm happy playing with ANNIHILATOR, why would I change that? I like it. It's fun. It's what I do... There was a 10-year period, 1997 to 2007, where we really went to a low, but I kept going because I was doing other jobs in music to pay for ANNIHILATOR. It all went back to keep ANNIHILATOR going. It's an up-and-down business. Try to keep a family together – a new wife and kids. To do that and travel the world for half the year, every year, it's not easy for anybody. People think, 'Wow, nice bus,' and everybody says, 'They give you food and they give you money and it's cool.' That part is the best, but then there's a side of it that you don't see. But we shouldn't complain, because we have it very good."

On moving from Canada to England:

Jeff: "I thought it would be easy, because it's not like I was moving to Germany or Spain or Italy and learning a new language. Of course, there's different accents that we speak, but it's English, so that makes it much easier for me. But I thought it would be so easy, because I like to travel. I travel all the time. England's a nice country, and there's lots to see. The music history in England is so incredible. To see all the different cities... I sit there at night on Google sometimes and go, 'Sheffield. DEF LEPPARD.' You go through all the different [cities] – 'Newcastle. VENOM. Brian Johnson.' The history is there, and it's really cool to be in the city that BLACK SABBATH started out in. But it was a totally different thing when I actually said goodbye to my family and friends [and] sold my house, cars, life, all the stuff I had, toys and things, furniture and said, 'Well, new life — let's just buy new furniture [and] start everything fresh here.' I thought it'd be easy, but it was actually the opposite. It was horrible for about eight [or] nine months. I realized I'd just said goodbye to my country and my family, my son, everybody. I thought, 'Oh, that's easy — that's what planes are for. I can get on a plane and go visit.' But it wasn't the same. I'm living in England. But after about eight months... My wife is really understanding. She saw what was going on with me. I thought I could handle everything, and slowly after time, I started realizing that Canada's my home. [Now] I can go back and forth, and I can deal with it, but it wasn't easy. It was actually very difficult. I found myself waking up in the mornings being very angry for a couple months, and I didn't know what was wrong with me. I was eating way too much, and then you realize, 'I'm a little depressed from leaving my country.'"

On what to expect from the group's forthcoming album, "Ballistic, Sadistic":

Jeff: "Nothing's ever going to beat our second album, [1990's] 'Never, Neverland', but I think this is one of the albums that we really brought up on the list. It's early-style, back-to-the-roots stuff."