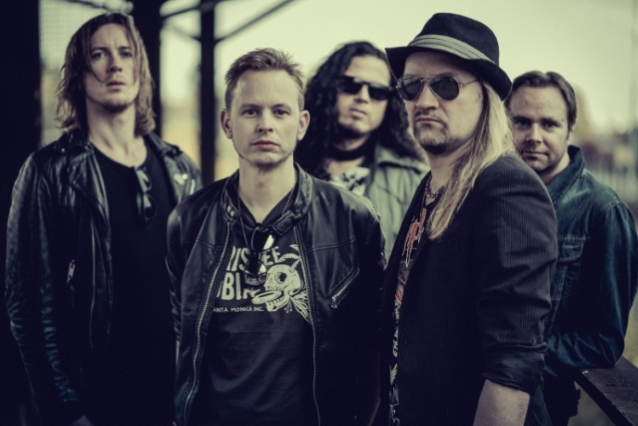 In a recent interview with Billboard, SONS OF APOLLO vocalist Jeff Scott Soto revealed that the melodic hard rock supergroup W.E.T., which also features members of the Swedish rock groups ECLIPSE and WORK OF ART, is currently working on its fourth album, the follow-up to 2018's acclaimed "Earthrage".

The three core members of W.E.T. — Soto, guitarist/songwriter/producer Erik Martensson (ECLIPSE, NORDIC UNION) and keyboardist/guitarist Robert Säll (WORK OF ART) — first joined forces in 2009 to record its self-titled debut. The band's sophomore effort, "Rise Up", surfaced in 2013, followed by the live CD/DVD "One Live - In Stockholm" in 2014.

In 2018, the band expanded to include drummer Robban Bäck (MUSTASCH) and guitarist Magnus Henriksson (ECLIPSE) and recorded "Earthrage". Its release was supported by a rare live performance at the following year's Frontiers Rock Festival VI in Milan, Italy.

Martensson told Music Radar in 2018 that while W.E.T. has only played a handful of concerts to date, the band members hope to change that in the future.

"I agree that is isn't a band until it's played live," he said. "I'm personally fed up with a lot of these [studio] projects, because some of them are just stupid. It can be 10 different songwriters on one album. It's just done to get some money from the record label, and the label can sell it because of the names on the record. I don't consider those bands at all — it's really projects. I think NORDIC UNION [Martensson's side project with PRETTY MAIDS vocalist Ronnie Atkins] and W.E.T. are somewhere in the middle. While doing records, we are doing it like a band, with our own songs, with no outside writers at all. But I agree that until it's performed live, it's a not a real, proper band. Having said that, I've never seen LED ZEPPELIN live, but I still enjoy their records. There is value in just a record."