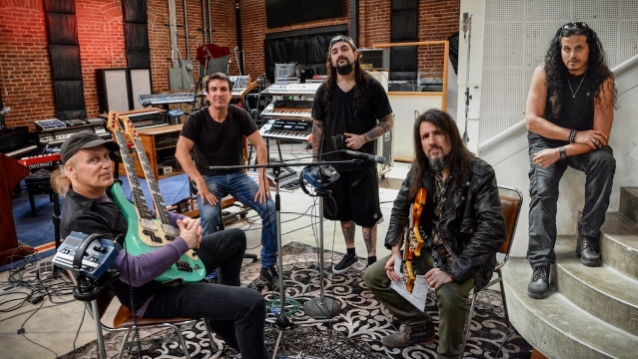 Jeff Scott Soto says that "Psychotic Symphony", the 2017 debut album from his SONS OF APOLLO progressive metal supergroup, is "a masterpiece." The veteran hard rock singer, who has played with Yngwie Malmsteen, TALISMAN and JOURNEY, told Greece's "TV War" (see video below): "I think this album will be as important in my career as the first Yngwie [album], as the first TALISMAN [record]. This is such a pivotal album in my career. I think we created something that will be timeless."

Asked if he was concerned that SONS OF APOLLO — which also includes former DREAM THEATER bandmates Mike Portnoy and Derek Sherinian, as well as guitarist Ron "Bumblefoot" Thal (ex-GUNS N' ROSES) and bassist Billy Sheehan (MR. BIG, THE WINERY DOGS), would not work, business-wise, Jeff said: "Not really. Of course, all the labels of 'supergroup' and all that were thrown at us. To me, it was a band of individuals who have, obviously, a huge background coming together because we all have that mutual respect for each other's history and each other's chemistry of what we can bring into this band. And everybody delivered, as far as I was concerned. And then, when you see the live show, you see even the extended version of what we tried to put on this record."

Soto also dismissed suggestions that there are ego clashes between the members of SONS OF APOLLO, explaining: "Everybody knows where their strong suits are. So you don't have to be egotistical — you just come in with confidence; you come in with the idea of knowing what's gonna be best for the band. Everything else is left at the door. Everybody knows what their roles are here, and it's not about, 'I have a bigger name,' or, 'I should be this or that.' All of that was away from this band from the very beginning. And that's the best part of it. Everybody feels equal in this. This is, in the true sense, a real band that would have started if none of us had the names. If we were all in our 20s, this band would have been just as strong as it is that we have these names together. So, I think that's probably why it works so well — because we all have that experience. We all know what it's like to work with people with egos, or people who don't have it. And we just come with what we have to offer in this band, and it makes it work."

Asked if it's true that Portnoy can be "a bit bossy sometimes" in a band situation, Jeff said: "It's not that he's bossy. He's… It's part of his DNA. He's a control freak. But I'm not saying that in a bad way — he says it himself. He's a control freak in the sense of we trust that he's got a vision and we're gonna follow it. And if we have something we feel against it, of course, we can say it. But for the most part, we've followed his vision. So far, it's been right."

SONS OF APOLLO is working on its second album for a tentative late 2019 or early 2020 release.

The band professionally recorded its September 22, 2018 concert at the Ancient Theatre in Plovdiv, Bulgaria for an upcoming CD, DVD and Blu-ray. During the show, in which the band played all of the material from its 2017 debut album "Psychotic Symphony" and a number of notable covers, SONS OF APOLLO performed two sets separated by an intermission — one "regular" set, and another that featured an orchestra and choir.