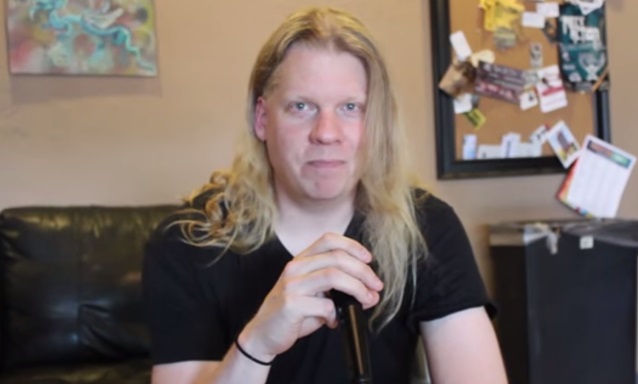 Former NEVERMORE and current CONQUERING DYSTOPIA guitarist Jeff Loomis hopes to enter the studio before the end of the year to begin recording his third solo album for an early 2015 release via Century Media Records.

"I still have one record to do with Century Media in my contract with them, and I'm gonna start working on that after this [CONQUERING DYSTOPIA] tour [with [ANIMALS AS LEADERS]," Loomis told The Age Of Metal in a recent interview (see video below). And I really don't know what I'm gonna do yet, as far as the writing. It's gonna be a great record, of course, but I'm still working on ideas for it. So I'm hoping to be in the studio maybe the middle of fall — September or October, something like that."

The recording lineup for "Conquering Dystopia" is completed by Alex Webster (CANNIBAL CORPSE) on bass and Alex Rüdinger (THE FACELESS) on drums.

The special tour edition of Loomis' latest album, "Plains Of Oblivion", was released on April 16, 2013 via Century Media Records.

Loomis's second solo album, "Plains Of Oblivion", sold 2,900 copies in the United States in its first week of release to debut at position No. 179 on The Billboard 200 chart. The effort landed at No. 2 on the Top New Artist Albums (Heatseekers) chart, which lists the best-selling albums by new and developing artists, defined as those who have never appeared in the Top 100 of The Billboard 200.

"Plains Of Oblivion" was released on April 10, 2012 in North America (one day earlier in Europe) via Century Media Records. The CD was produced by Aaron Smith (7 HORNS 7 EYES) and features cover artwork by Colin Marks of Rain Song Design, who has previously worked with ALL SHALL PERISH, THE END and XERATH.