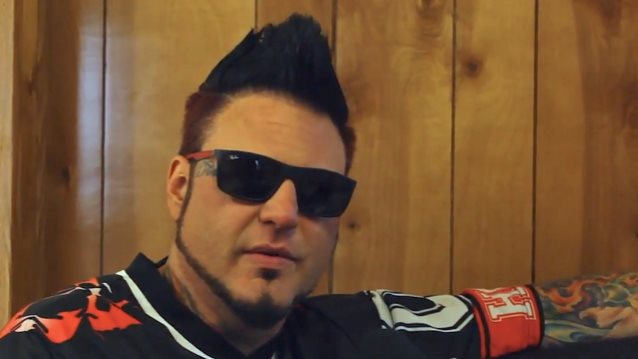 Jason Hook stands by his recent statement that FIVE FINGER DEATH PUNCH's upcoming album will contain some of the band's strongest material to date.

FIVE FINGER DEATH PUNCH's follow-up to 2015's "Got Your Six" was delivered to the band's longtime record label Prospect Park last December, but a legal battle with the company delayed the LP's arrival.

Earlier this month, it was announced that FIVE FINGER DEATH PUNCH had resolved its dispute with Prospect Park, with a greatest-hits album set to arrive in December, and the new full-length album to follow next year.

Asked why he feels FIVE FINGER DEATH PUNCH's next disc will be the group's finest release to date, Hook told the 97.7 QLZ radio station at this month's Sonic Boom festival in Wisconsin (see video below): "Well, there is a certain part of finishing something brand new that is going to make you feel like it's the best. Because it's new, it has a freshness to it, so it has an unfair advantage over the other ones. But I think that what's really important is how the public feels about it. 'Cause what I like and what works for me doesn't necessarily… I can't count on that to work for everybody. But I think it's a great record. Everything that we do, we put a hundred and ten percent into it. I mean, we're very particular about these records because we're living in an age where people are so quick to consume that they'll blow through a record and then throw it over their shoulder: 'What's next?' So I kind of think that these things are forever. They have to be great. They can't just be good; they have to be awesome, so that, well, for one, people will buy it. 'Cause if it's not awesome, people will just listen to it for free. I like the record. What can I tell ya? I hope you all get to hear it next year."

The guitarist was also asked if it's important for FIVE FINGER DEATH PUNCH to continue to make full-length albums as opposed to putting out singles and EPs, like other artists have done. He said: "Well, I don't know if anyone's really figured it out. I never really liked the EP thing. To me, it was always, like, 'Why an EP? Are you gonna come back and finish the rest of it later? Or you didn't have money to finish it? I mean, why an EP?' I like just making proper full records. I think that we're just gonna take our chances and continue to release full records."