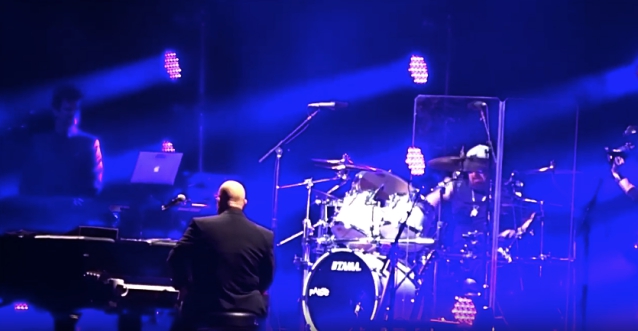 The drummer was behind the kit for "Whole Lotta Love", featuring vocals by Joel's guitarist Mike DelGuidice, followed by "Good Times Bad Times", with Joel singing.

Two years ago, Joel told SiriusXM that he was blown away when he was initially exposed to LED ZEPPELIN's music.

"LED ZEPPELIN's first album came out in 1969, and I got the LED ZEPPELIN album and it just pulverized me when I heard this," he said. "It was like hearing Beethoven's Ninth Symphony for the first time… John Bonham — great drummer. Jimmy Page — a virtuoso guitar player. Almost like a classical orchestra — self-contained within his guitar playing. John Paul Jones and Robert Plant — I mean, what a great band. [They were] probably my favorite band for that whole era, from 1969 to the mid-'70s. I was a huge LED ZEPPELIN fan, and I still listen to their stuff to this day. Actually, when we do a soundcheck at one of my shows, we don't really play my stuff; we play LED ZEPPELIN."

In a 2018 interview with Vulture, Joel revealed that many people have tried to get him back into the studio over the years, including producer Rick Rubin and Joel's former label head, Clive Davis, who once asked him, "'Why don't you cover the great classic-rock songs?' I think he meant [Barry] Manilow stuff, but I said, 'Okay, you mean LED ZEPPELIN?' He didn't like that idea," Billy recalled. "'Kashmir' would've been pretty great to cover. That's a gorgeous song."