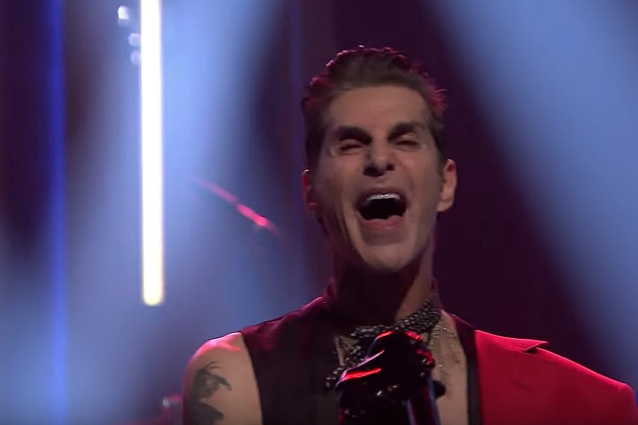 JANE'S ADDICTION frontman Perry Farrell took part in an interview and live performance on last night's (Monday, June 17) episode of "The Tonight Show Starring Jimmy Fallon". Video footage of his appearance can be seen below.

Perry recently released the official music video for his latest single, "Pirate Punk Politician". The track, which he previously described as "a good old-fashioned protest song," appears on his latest album, "Kind Heaven", which came out on June 7 via BMG.

Asked what exactly he is protesting with "Pirate Punk Politician", Farrell Farrell told the Z93 radio station: "Well, we're protesting autocracy. We're protesting strongmen that have come up around the world that are fascists and bigots and racists and ignorant of the state of the world and, in particular, the environment and the health of Mother Earth. We want to raise the consciousness of the voters around the world, just so that they understand that there is a way out of this tangled mess that we've gotten ourselves into. The world is getting so polluted and taken over by people that just think that they are above the law and can do whatever they want and they are just ripping off the people — they are ripping off the people that are the working class. That's what we're protesting against."

Farrell kicked off a North American tour in support of "Kind Heaven" on June 7 in New York City. The run wraps June 25 in Toronto, Ontario, Canada.