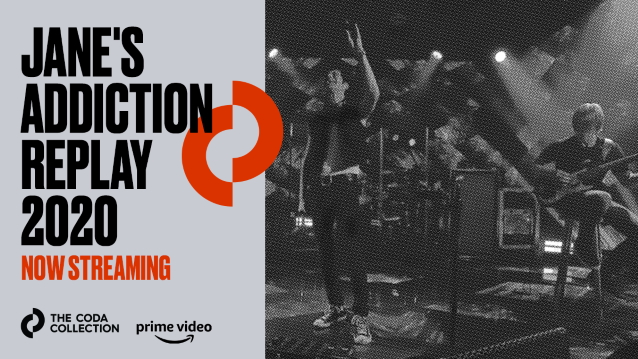 Legendary Los Angeles rock band JANE'S ADDICTION is back with "Replay 2020" — a new documentary and concert film featuring interviews with the group's Perry Farrell, Dave Navarro, Stephen Perkins and Chris Chaney paired with a seven-song performance from the band's Virtual Lollapalooza performance captured in the summer of 2020 (their first performance in three years).

"Replay 2020" is available to stream today exclusively on The Coda Collection, a subscription streaming offering featuring an exclusive, curated selection of the most iconic concert films, music documentaries, and episodic series spanning decades and genres via Amazon Prime Video channels.

"After 35 years of fighting I'm super glad we're all alive and sounding so good," said JANE'S ADDICTION frontman Perry Farrell. "This session just sparked my imagination on what we can accomplish during the next 10 years."

In accompanying editorial on CodaCollection.Co, contributor Annie Zaleski writes: "Short interview segments provide a baseline knowledge of JANE'S ADDICTION's history as they touch on the band's formation, major albums such as 'Ritual de lo Habitual' (1990) and the quartet's close association with Lollapalooza, the festival Farrell co-founded in the early '90s. Still, some of these interviews offer lovely insights: Perkins speaks movingly about the timeless nature of 'Then She Did', featuring lyrics Farrell wrote about the death of his mom and girlfriend, while multiple members offer engaging recollections about Lollapalooza's communal early days."

The Coda Collection is available to Amazon Prime members in the U.S. now for $4.99 per month, with a free seven-day trial, and will roll out globally throughout the rest of 2021.