JANE'S ADDICTION aggressively melded avant-garde, funk, metal, and punk sounds with raw sexual energy and became an incomparable force. On April 21, Rhino celebrates the legacy of JANE'S ADDICTION and unearths "A Cabinet Of Curiosities"; a 3-CD/1-DVD JANE'S ADDICTION boxed set of demos, live performances and rarities that includes 30 unreleased tracks. The set will be available from Rhino in stores and at www.rhino.com in a striking, limited-edition wooden cabinet for a suggested price of $74.98. A digital version will also be available at all digital retail outlets. Audiophiles and vinyl geeks take note that on April 18, to celebrate this year's Record Store Day, Rhino will release 180-gram vinyl versions of the seminal JANE'S albums "Nothing's Shocking" and "Ritual De Lo Habitual" for a suggested price of $17.98 and $24.98 respectively.

The "Cabinet" collection focuses solely on the band's original incarnation of vocalist Perry Farrell, guitarist Dave Navarro, bassist Eric Avery and drummer Stephen Perkins. Last year, this founding foursome played together for the first time in 17 years and has since raised eyebrows with a trio of celebrated secret underground shows in tiny clubs around Los Angeles. Now, with 43 tracks on CD, "A Cabinet Of Curiosities" offers a comprehensive look at the band from demo recordings of key tracks from "Nothing's Shocking" (1988) and "Ritual de lo Habitual" (1990) to live recordings of the band roaring through its best songs onstage.

The set opens with five songs recorded in 1986 during a session at Radio Tokyo studio in Venice, CA, including an unreleased version of "Jane Says". The remaining 12 songs on disc one are unreleased demos from 1987 that feature futures JANE'S classics including "Three Days", "Ocean Size", "Classic Girl", "Summertime Rolls", and "Stop!"

The second disc contains more unreleased demos ("Ted, Just Admit It") along with a recording of the band rehearsing "My Time" and a 12" remix of "Been Caught Stealing". The disc also rounds up stray songs from various compilations (GRATEFUL DEAD cover "Ripple", "Don't Call Me N.gger, Whitey" with Ice-T and Ernie C) as well as rare and unreleased live cuts including roaring covers of LED ZEPPELIN's "Whole Lotta Love" and THE STOOGES' "1970" as well as the live staple dubbed "Bobhaus", which features lyrics from BOB DYLAN's "Like A Rolling Stone" sung over the music of BAUHAUS' "Burning From The Inside".

JANE'S ADDICTION made great albums, but it's the band's live shows that cemented its legacy. All of the darkness, soul, aggression, and musical zealousness came pouring out night after night as the foursome gelled into a thunderous and dangerous machine. The third disc features a complete live show from December 19, 1990. This performance was the second show from the band's legendary three night run at the Hollywood Palladium and features a number of fiery, unreleased performances including "Mountain Song", "Whores", and "Ocean Size", and "Been Caught Stealing".

The DVD included with "A Cabinet Of Curiosities" begins with "Soul Kiss", previously available only on VHS, which features the video for "Mountain Song" that was banned by MTV, a video for "City" and candid home movies of the band. The DVD also brings together six additional music videos as well as a trio of unreleased 1990 performances taped in Milan for MTV Italy.

The wooden curio cabinet that houses the limited edition set looks like a shrine to the band made by an adoring fan. The box opens to reveal recreations of early concert fliers, ticket stubs, a set list and other memorabilia.

"A Cabinet of Curiosities" track listing:

Live at the City Square in Milan (for MTV Italy, October 1990) 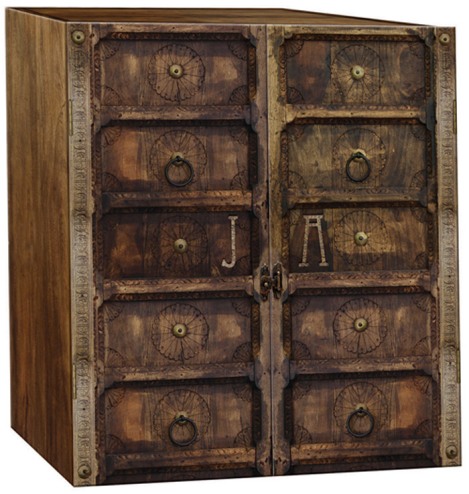 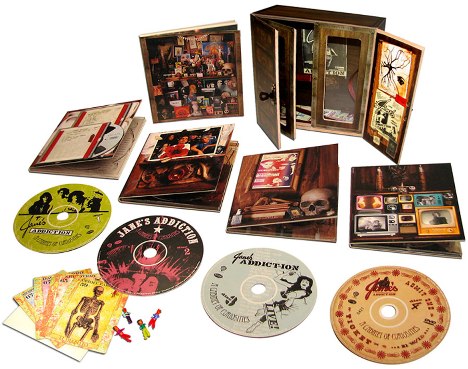