According to Pitchfork, a limited-edition box set of JANE'S ADDICTION rarities, "A Cabinet of Curiosities", will be released on April 21 via Rhino. The set will include three CDs and one DVD in a wooden case.

The first disc will contain all unreleased demos from 1986 and 1987. The second will include more demos, but also unreleased live tracks and beloved rarities covers of the GRATEFUL DEAD, THE STOOGES, and LED ZEPPELIN, as well as a version of SLY AND THE FAMILY STONE's "Don't Call Me N.gger, Whitey" that they did with Ice-T.

The DVD will include "Soul Kiss", the JANE'S documentary previously unavailable on DVD. It'll also feature the "Mountain Song" video that MTV banned and various music videos and home movies.

"A Cabinet of Curiosities" track listing:

Live at the City Square in Milan (for MTV Italy, October 1990)

Professionally filmed video footage of the reunited original lineup of JANE'S ADDICTION performing on February 16, 2009 at the Echoplex in Los Angeles can be viewed below (courtesy of Pitchfork.tv). 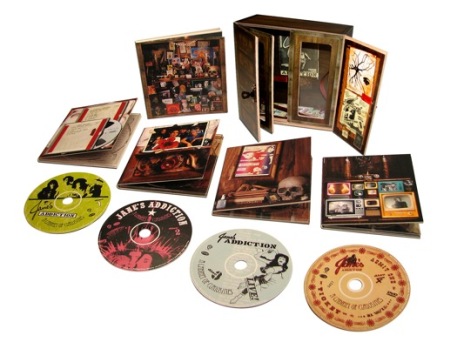