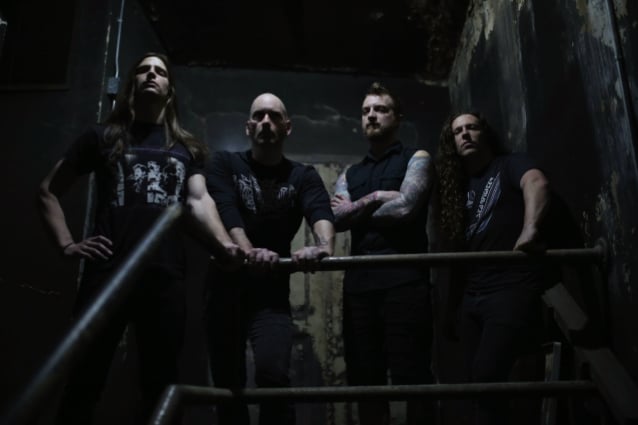 Alex Haber of Heavy New York conducted an interview with guitarist/vocalist James Malone and bassist Noah Martin of melodic tech-death overlords ARSIS prior to their October 26 concert at The Kingsland in Brooklyn, New York. You can watch the entire chat below. A few excerpts follow (transcribed by BLABBERMOUTH.NET).

On the creation of the latest studio album, "Visitant":

James: "It was fun. It was a lot of fun to get together. We did an insane amount of pre-production. A lot of us ended up tracking a fair amount of the album at our respective home studios, so it was kind of relaxed. It wasn't a super-stressful experience necessarily. Mixing of it went very smooth, Mark Lewis knocked it out of the park as usual. It has really cool tones. It sounds pretty natural to me, especially in comparison to a lot of the metal records getting produced these days. I think we're all pretty stoked with it."

Noah: "We took our time and we were able to like, Jim said, able to work at home, get really good performances. The mixing performance for Mark didn't take an awful lot of…I mean, it took a lot of work on his part, but it wasn't as difficult. He wasn't making a lot of edits, he was letting the tracks speak for themselves and he was able to do his magic a lot more effortlessly."

On whether the band considers "Visitant" to be the logical follow-up to 2013's "Unwelcome" or stand on its own:

James: "I definitely think it stands on its own. I don't know if that was necessarily…"

Noah: "It was something that happened very naturally. It was a natural progression and a lot of those riffs and parts came together over the course of three, four years."

James: "There was a bunch of riffs that I had started working on maybe seven years ago that Shawn [Priest, drums] and Noah just had the original files of. Shawn kind of started arranging them together. They weren't intended to be necessarily related at all and it really helped get a jumpstart on a quite a few songs that way. But as far as the gap being, I don't know, it wasn't necessarily planned. Honestly, it really didn't feel like that long of a gap to us. We were really supporting 'Unwelcome' up into 2016 with some tours. It was really a two-year little lull there where not too much was happening, but Brandon [Ellis, guitar] joined THE BLACK DAHLIA MURDER and I was working with NECROMANCING THE STONE and Shawn and Noah had their own projects going. Noah and I both made some major moves during that time. I moved to Dallas from Virginia. He moved to Seattle from Virginia. All of that stuff takes time and focus away from doing a new ARSIS. I felt it was a very natural time for us to get a new album together. I think it came out pretty rad. We're stoked on it."

On whether they feel ARSIS can appeal to fans of various sub-genres of metal:

Noah: "We'll certainly cater the set to the crowd and we try to change things up as much as we can. We picked songs in the set that are geared toward a certain audience, sometimes it's just whatever, these are the songs we like to play, but, yeah. [Laughs]"

James: "I think ARSIS, I don't want to say we wear many hats, but we do have a lot of influences, we have a lot of influences that are not death metal and not extreme metal. To me, that's always been the one thing that made ARSIS stand apart is just that it was a take on extreme metal by a bunch of dudes that don't necessarily like extreme metal, if that makes sense. I like a lot of '80s synth-pop and I always have, like DEPECHE MODE and Noah is really into like power metal trad-metal, like WHITESNAKE, just really sleazy, slutty music and we all kind of bring different things to the table for dinner. The result is…"

Noah: "One hell of a Venn diagram."

James: It's one hell of a smorgasbord of stuff. I think promoters and booking agents kind of have this idea, 'Well, shit, ARSIS will fit on this because they have this one song with that breakdown.' It doesn't always work out as the intentions behind it, but, you know, I do also feel that we win over a lot of fans, too. We win people over as well. But, yeah, we cater the sets and we have to try to play up the situation as best as possible and yes, for instance, this tour is a very slam-heavy tour. The last tour we did was a very, maybe, more tech type of proggy, tech type of tour. I think we're still searching for the perfect tour for us, but I do think our music is varied enough that when it falls onto the right ears, it's pretty awesome."

On the origins of ARSIS's sound:

James: "When I started ARSIS, I was really into a lot of traditional metal stuff like CRIMSON GLORY, QUEENSRŸCHE, that sort of stuff. I had met the original drummer in ARSIS [Michael Van Dyne] who was into more extreme metal. He introduced me to the Scandinavian stuff like AT THE GATES, DISSECTION, I was just, like, 'I bet my riffs if I just made them a little bit faster and threw some of these nasty vocals on it, we'll see what happens.' I just started doing that. It was a weird take on extreme metal that wasn't necessarily influenced by extreme metal so much."