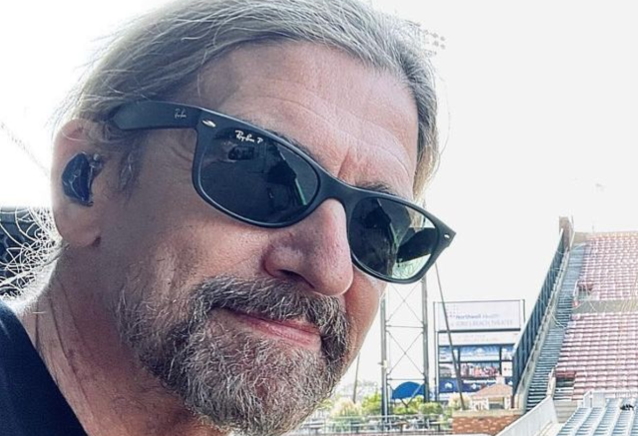 MEGADETH's new touring bassist James LoMenzo says that he is "having the best time" playing with the band again.

Asked in a new interview with Melodic.net what it has been like for him to play with MEGADETH on "The Metal Tour Of The Year" this summer after such a long absence from the band, James said: "Well, I'm into this for six weeks right now, and I'm really having the best time. Dave's [Mustaine, MEGADETH leader] been really welcoming and supportive, and the band as a whole is just fantastic. It's a real powerhouse. Dirk [Verbeuren, MEGADETH drummer] is a dream drummer for this type of music, and Kiko's [Loureiro, MEGADETH guitarist] just so musically deep. Dave's playing as good or better than ever and now that he's on those Gibson guitars, his sound is so much more gut punching then I remember it."

Regarding how he ended up returning to MEGADETH, James said: "Dave's management reached out at first to see if I'd even be available, which I really wasn't, but after a call with Dave, I realized how important for MEGADETH and even for myself this would be. Time was ticking, so I knew it would be a crunch, but having been here once before the re-learning curve was a tad less steep. I made some arrangements with the Fogerty camp, and they were gracious enough to allow me a leave to do this."

Mustaine has yet to reveal who played bass on MEGADETH's new album after Ellefson's tracks were removed from the LP following his exit from the group.

In early May, Ellefson released a statement on Instagram denying all social media chatter that he "groomed" an underage fan.