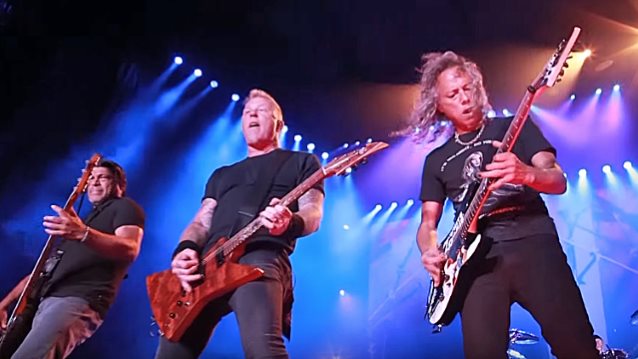 In a brand new interview with Theresa Rockface of the 94.5 The Buzz radio station in Houston, Texas, James Hetfield spoke about Robert Trujillo's contributions to METALLICA, fourteen years after the bassist joined the band as the replacement for Jason Newsted.

"We were just talking about this the other day in the car," Hetfield said (see video below). 'Actually, we just played [a benefit concert for] the Native Fund in Iowa, and I don't know what Robert was doing on his solo thing that night, but afterwards I just went up to him and I said, 'Dude, that was awesome! I don't know what you did different, but it was so clear, precise and so good.' And he's, like, 'Oh, thanks.' You know, it's just a cool little thing, 'cause at that point, he's doing a solo and I'm trying to get my shit together — breathe and stuff like that — 'cause I'm an old dude.

"But just talking about how Robert… Who else could [have come in and done the job]?" Hetfield continued. "I mean, there were a few people we auditioned, I know. It might have worked out with other people, but it's hard to find people that are, say, your age; kind of your upbringing, musically, obviously; ability-wise; they've been on the road. It's not like you're bringing some kid out for his first time, and it's, 'Oh my God!' He's going through all the stuff that you did twenty-five years ago. He's got kids. He's married. It just gelled, and it's still gelling. And his personality is probably one of the best contributions, I think, to the band, 'cause he's so chill, he's so up for anything, he's always in there rehearsing. So he does fit in."

Asked about the differences in the way he had to approach the material originally recorded by Newsted compared to the songs that were laid down by METALLICA's late bassist Cliff Burton, Trujillo told the "Talk Is Jericho" podcast: "A lot of the stuff that Bob Rock produced was a bit more… Obviously, groove is very, very important on those songs, like 'Black Album' songs. But then just really keeping it fairly simple in that style. With Cliff, we're talking about a little bit more aggro, but tight. So they are different styles. I still play with my fingers, even on the 'Black Album' material. But the great thing about… What I can say I'm pretty proud of being in METALLICA these years is being able to play, like, the 'Black Album' in its entirety — songs that were never played live: 'The Struggle Within'. There was about three songs on that album [that had never been played live]. And even 'Orion'… We play 'Orion' a lot now; it's kind of an active song in the set. And that was a song that hadn't really been played years before. And 'Dyers Eve', off the '…And Justice For All' album, that was a song that had never been played live as well. So the fact that, here we were, age 50, and we're attacking songs that hadn't been attacked… And in a lot of ways, I feel that that challenges us, and it actually makes this unit a better band."

The Rock And Roll Hall Of Fame band is touring in support of its tenth studio album, "Hardwired... To Self-Destruct", which features the current single "Now That We're Dead".

The North American leg of METALLICA's "WorldWired" trek will hit stadiums in eighteen more cities before ending in mid-August.