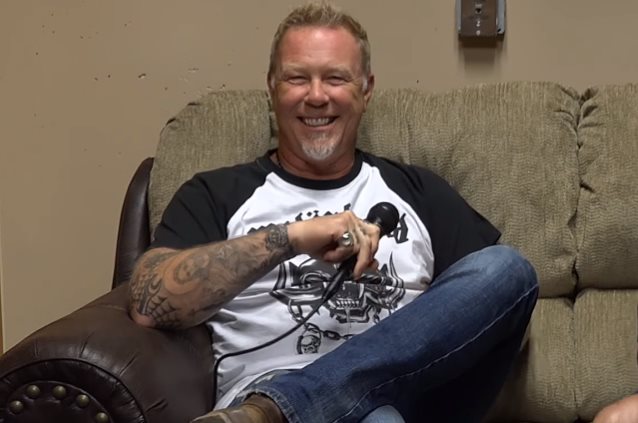 Meltdown of the WRIF radio station conducted an interview with METALLICA frontman James Hetfield before the band's July 12 concert at Comerica Park in Detroit, Michigan. You can now watch the chat below.

Asked if he would ever consider doing a side or solo project, Hetfield said: "METALLICA's pretty much my side project. I get to do whatever I want in METALLICA. [Laughs] There's not really a need for it. I write things that make me feel good, and if they end up in METALLICA, then that's even better. Sometimes they don't. Sometimes they're like a 'Nothing Else Matters' kind of thing, and they're trying to be hidden: 'Don't listen to that.' But, no, there's really no need for that. Or time — there's no time for that either. [Laughs]"

Hetfield's comments echo those he made during a 2015 interview with METALLICA's fan-club magazine So What!. He said at the time: "I think METALLICA, for Lars [Ulrich, METALLICA drummer] and myself— I'll speak mainly for me, but I know he feels the same way — METALLICA is our side project too. It's our main project, it's our side project, it's our 24-7 project. It doesn't mean that I don't want to try other things, like voiceover work, a book, photography, art, cars… you name it. I want it to add to me, not subtract from METALLICA."

He continued: "Before, I might have come to the table with a negative attitude around side projects: 'You're doing that, which means you're not into this band as much as I am or Lars is.' I'm tired of that feeling and I'm tired of that resentment.

"At the end of the day, I know Lars and I are the guides of this. We steer METALLICA most of the time, and the other two guys are very happy that that is the way it is. And we're all equal. We're all contributing in our way. But I think Lars and I are very comfortable being the spearheads of it. And we are in a great spot right now, because everyone knows the band is prioritized above everything, but everyone also feels free to to explore other things."

Former METALLICA bassist Jason Newsted said in a 2014 interview that he left the band sixteen years ago over the way his then-side band, ECHOBRAIN, was handled. Newsted explained: "The management of METALLICA was very, very excited about ECHOBRAIN, wanted to take it out for me, wanted me to do ECHOBRAIN also, with METALLICA. They felt ECHOBRAIN was that good, the singer was that good, and it didn't affect METALLICA because it was a totally different kind of thing, and I was in METALLICA; that would give it its pedigree already."

Newsted continued: "They had told me, pretty convincingly, 'This is a great record, we've been playing it around the office, that's all I’ve been hearing, it's fantastic, this kid has a great voice. Let's do something with this.' That's what they told me, and then James heard about it and was not happy. He was, I think, pretty much out to put the kibosh on the whole thing because it would somehow affect METALLICA in his eyes, because now the managers were interested in something I was doing that had nothing to do with him."

METALLICA is touring in support of its tenth studio album, "Hardwired... To Self-Destruct", which came out last November.

The North American leg of METALLICA's "WorldWired" trek will hit stadiums in ten more cities before ending in mid-August.

The next stop on the tour is Toronto, Ontario, Canada on July 16.