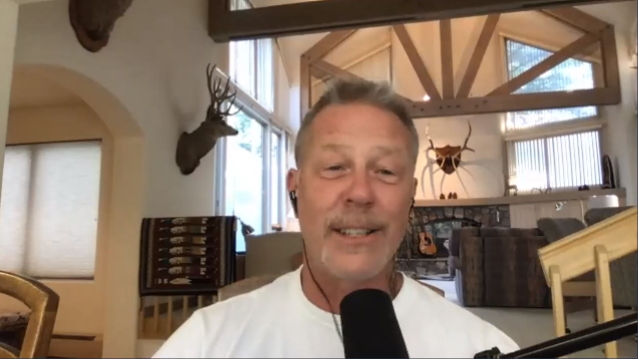 The four members of METALLICA took part in a SiriusXM "Town Hall" Thursday night (August 27) via Zoom from their respective homes. Asked how he has been spending his coronavirus downtime, frontman James Hetfield said: "For me, and I don't wanna sound ungrateful, 'cause I know there's a lot of people out there that are struggling because of this COVID… Where I live, it's all service industry. And, obviously, the music industry, it's tough — it's taken a big hit. For us, we're road dogs — we've been out on the road forever — so you're either on the road or you're writing. So the obvious thing is, 'Well, we're not on the road. Start writing.' So, [I've written] tons of material. And I'm sure there's lots of musicians out there that are just, like, 'Okay, what can I do? I'm gonna write and just get into that,' which I love doing.

"I'd say the other huge thing that's come out of this is getting to stay home in my hometown here [in Colorado], so [I've been] building community with friends, doing outdoor stuff," he continued. "We're pretty fortunate here up in the mountains that COVID hasn't really locked us down as much as some other places. And I feel for the people that live in the big cities. But out here, you can still get out, bike ride, raft, fishing, shooting, hunting — whatever it is.

"I've got lots of friends here that I couldn't have before, so [I've been] hosting barbecues and having people over and building a community with friends that I wasn't really able to do before," he added. "Cause, 'Oh, I can't do that, 'cause we've gotta go next week. We've gotta rehearse. We've gotta do that.' So, [I've] actually [been] taking time to build true friendships. Not that I don't have them, but locally, it's been a huge thing for me. And getting in the garage. I love getting in the garage and just tinkering, doing some more welding. I welded a couple of things for the All Within My Hands foundation… I've made some bird feeders. I'm right now staring out the window at about 50 different birds that come up here and eat. That's kind of my new TV right here. So, just enjoying nature a lot more and enjoying my life the way it is now."

As previously reported, METALLICA will be the first rock band to be featured in the Encore Drive-In Nights series, with a full set showing August 29 at hundreds of drive-in and outdoor theaters across the United States and Canada. The show was shot specially for the Encore Drive-In Nights Series at a location near the band's Northern California headquarters and was subsequently edited and mixed by METALLICA's award-winning production team to the highest standards possible. The concert, the band's first show in nearly a year, will feature material from throughout their near-four-decade career and provide METALLICA fans with an intimate, unique and truly memorable concert experience.