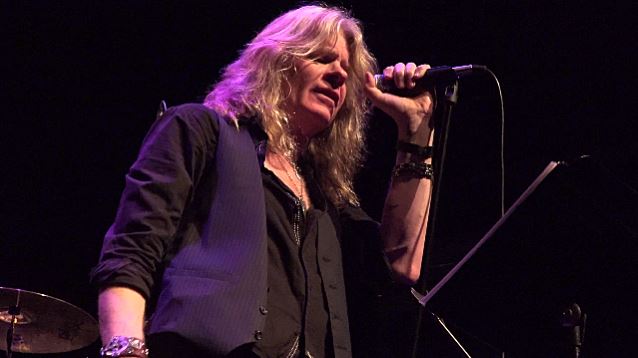 RED DRAGON CARTEL, the band led by former OZZY OSBOURNE and BADLANDS guitarist Jake E. Lee, has tapped singer Chas West (pictured; Jason Bonham, LYNCH MOB, 3 LEGGED DOGG) to front the group for its next round of tour dates, which kicks off this Friday, May 1 in Portland, Oregon.

Beck made headlines earlier in the month when he inexplicably sang the lyrics to Osbourne's "Now You See It (Now You Don't)" while the rest of RED DRAGON CARTEL played "The Ultimate Sin" at their first show together in Miami, Florida.

Bassist Greg Chaisson exited RED DRAGON CARTEL last month. He said in a statement: "I'm afraid to say real life just jumped right up and got in the way of my good time. I can no longer take any more time away from my regular job. I want to thank everyone in the RED DRAGON CARTEL organization, and most of all, my best friend Jake E. Lee. And a very special thanks to all of you who have treated me so great! They will continue on without me and it will be fantastic as always."

A new video interview with Esposito, conducted by Rock Music Star, can be seen below.

Regarding how Beck landed the frontman gig in RED DRAGON CARTEL, Esposito said: "Greg had offered a replacement singer to Jake [after the band split with Darren], and that would be Michael. Michael did this East Coast run. And I don't really think Jake ever heard him sing [before]; I think Jake went on Greg's word. I think that's the way the situation went down. And he had a horrible first show; the Miami show. It's all over the Internet. He was singing the wrong lyrics. It's just not a good spot to be in; he kind of got shredded too."

RED DRAGON CARTEL's self-titled debut album sold around 5,000 copies in the United States in its first week of release to debut at position No. 69 on The Billboard 200 chart.