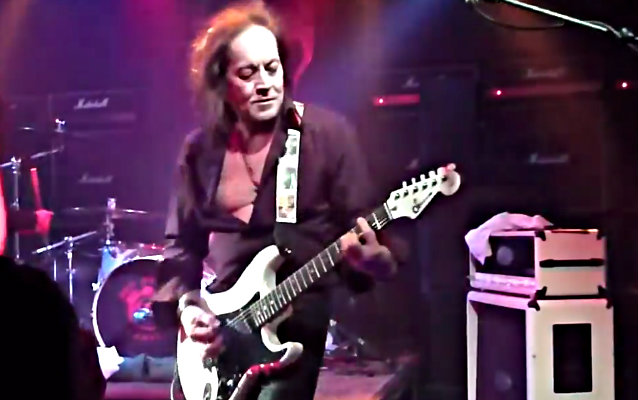 Classic Rock Revisited: It is not like you have not picked up a guitar in a quarter of a century, but you have not done it like you are doing it now. How does it feel to be back?

Jake: I still feel that I need to get my chops back up, and they are getting there. It does feel good. It is just the fact that there is so much love out there. It is really nice. I've always done it for selfish reasons… Go ahead and interrupt me now…

Classic Rock Revisited: I will. What do you mean? Explain that in depth.

Jake: It has always been selfish. My reason for playing has always been because I like that feeling. I like playing rock and roll music. The audience has always been secondary. If they hate me, then fuck you, I don't care… I'm not doing it for you. That is not the case this time out. Even on that first show, I was not that way. I will admit that it makes it that much better for me. I really can't believe that there are people that give a shit after all of this time. People are so supportive. I will look out in the audience while I am playing and they get so excited and they say, "We love you." That really makes it that much more wonderful; it really does. I don't think I particularly deserve it, and I am surprised it's there, but it really makes it really cool.

Classic Rock Revisited: Why did you wait so long?

Jake: When I bowed out, it was the mid-Nineties... People only have a shelf life of so long before they are no longer considered cool. I think my shelf life was running out. By then, I was that "hair metal guy." It wasn't cool to be Jake E. Lee, and I was not getting any offers that I even felt like considering. BADLANDS had just broken up and I put my heart and soul into that band; it broke my heart when that band broke up. It was a good time to bow out. After that, as I mentioned earlier, I don't need a spotlight on me. To me, it is a pain in the ass. I don't need to be on stage with a bunch of people looking at me, as that is not my motivation. If I am anywhere else, I don't want to be the center of attention. I didn't mean that I didn't miss it. I would run into a lot of my brothers from the '80s and they would say, "Don't you miss it? I mean, the crowd and all of that stuff." I would be like, "No, that is the part of it that I don't particularly miss." I did miss playing with other musicians. During that whole time, I did still keep writing because that is just who I am. Music is my big passion, so I would keep writing. With a computer, you didn't need anybody else. I could just write and get a looping program and write some drums and I could do it all myself. I was satisfying myself by writing music. I didn't care if anybody else heard it. I would write it and then listen to it and go, "Oh yeah, I really like that." I was satisfying myself, which is the main reason I do music. I like being satisfied by myself. God, now, the way I just described that… it seems like masturbation. [laughter] Now I feel weird!

Classic Rock Revisited: I know what you mean.

Jake: Good! My main need, musically, was being satisfied, and I didn't need to be on a stage. What I missed was being with other musicians where I could bounce ideas off or that would contribute to my ideas. I really missed that.

Classic Rock Revisited: How did you balance mixing the classic Jake E. Lee guitar style with a new band that you have now in 2013? I know it is Jake E. Lee's RED DRAGON CARTEL, but this is still very much a band effort.

Jake: The only reason that it is Jake E. Lee's RED DRAGON CARTEL is because there will be some interest in it then. If it is just RED DRAGON CARTEL and I just decide to call myself Jake Kilbeggen as guitar player, then we are one of a thousand bands releasing something that week and no one is going to take an interest in that. We would have to start from the bottom. The good thing is that I can put my name on it and all of a sudden we do have some audience and there is some interest. It is a band. The last thing I would want to do is to live off of what I did in the '80s. A lot of bands are still living off of what they did in the '80s and they are basically just doing the same thing over and over. God bless them; everybody needs to pay their rent. To me, music is my passion and I will never whore that out. The last thing that I wanted to do was to be one of those. Yes, I was big in the '80s and I can still do all of the things that I used to do then, but I can also do this. To just sound just like I did in the '80s would just bore the shit out of me. There was no intent to make it different, but there was also no intent on trying to recreate the past.

Classic Rock Revisited: If you try to make it all modern, people will say you are trying to distance yourself from who you are, but if you go retro, they will say you are incapable of being current.

Jake: Especially with the Internet, you can't win. A lot of them are pussies sitting behind a fucking computer screen and they can talk shit without getting hurt and a lot of them do it because of that. If you come up and talk that shit to somebody face to face, then there is a good possibility that you're going to get your ass kicked. With the Internet, there is no possibility that you will get your ass kicked, so there are a lot of big-mouthed people that, no matter what you do, will find a way to badmouth it. I don't do this too much, but I decided that when the "Feeder" lyric video came out I went and read some of the comments. One of them was saying, "Jake went nu metal." It's not fucking nu metal. It does not sound like it came out of the '80s either. There will be people like that. The next one was, "How can you be in BADLANDS, which was such a natural and organic band and then do this?" You know what? Fuck you. You know what? I did BADLANDS. You like BADLANDS? Fucking listen to BADLANDS, I don't care that you don't like what I'm doing now. I don't care. The record was not made for you, going back to my selfish reasons… man; I am starting to sound like an ass. [laughs]. I didn't make the record to make a bunch of people happy. I made the record to make me happy. When I first heard [Robin] Zander sing "Feeder", then damn it, I liked that feeling. If somebody else gets that same feeling listening to it, then that is a bonus, but it was never my objective. I've gotten shit my entire career. When I joined Ozzy, I got shit from fans going, "Randy [Rhoads] rules… you suck." "Okay, I am never going to please you… Fuck you… goodbye." When BADLANDS came out, I got shit. Guitar players were like, "What the fuck's this? I don't want to hear blues. Why aren't you playing like you did with Ozzy?" I got that kind of shit and I was like, "Because I played that with Ozzy. If you like that then fucking go listen to it. I am doing something else." I've gotten that shit my entire career and I am not going to try to please anyone other than me. Hopefully, there are some people that like the same stuff that I like.