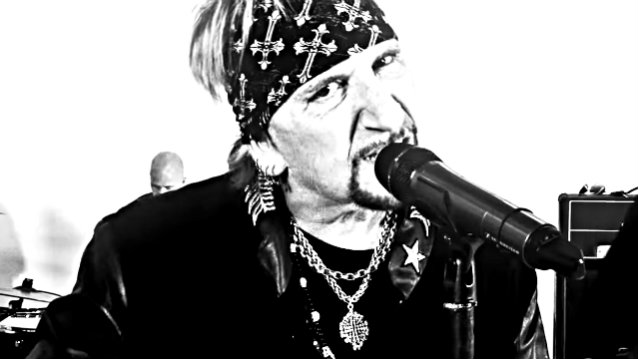 "Sign Of The Times", the new video from JACK RUSSELL'S GREAT WHITE — which features ex-GREAT WHITE singer Jack Russell alongside former GREAT WHITE bassist-turned-guitarist Tony Montana (as a guitar player and keyboardist), Dan McNay (MONTROSE) on bass, Robby Lochner (FIGHT) on guitar and Dicki Fliszar (BRUCE DICKINSON) on drums — can be seen below. The track is taken from JACK RUSSELL'S GREAT WHITE's debut album, "He Saw it Comin'" (originally titled "The Gauntlet"), which will be released on January 27 via Frontiers Music Srl.

"I got the idea for 'Sign Of The Times' while sitting at an airport waiting for a plane," Russell told Ultimate Classic Rock, which premiered the video. "I was looking around people watching, and after a few minutes, it came to me that almost everyone was staring into their device of choice. I felt sad for humanity and its loss of conversation. I started to think about the fact that people can be and say anything they want to one another behind the safe anonymity of a keyboard. It has allowed bullies to exert themselves not one to one or in a group or class but to everyone their victim knows. It's sickening."

He added: "Kids today are really missing out. They spend most of their time indoors playing on their computers. They can become isolated. Even if they have friends, they spend their time playing video games together instead of outside enjoying this beautiful planet we live in."

Rather than look backwards and merely attempt to relive the multi-platinum hard rock entity's storied origins, Jack Russell set his sights on the future. In December 2011, JACK RUSSELL'S GREAT WHITE first bared its teeth. Robby Lochner has been with Jack since JACK RUSSELL'S GREAT WHITE's inception, and they soon welcomed longtime bassist and friend Tony Montana — this time as a guitar player and keyboardist. They then added drummer Dicki Fliszar, then bassist Dan McNay. This group has a sharp, soaring, eclectic, hook-laden new album ready, boasting the bluesy hard rock stomp that made Russell and Montana icons in the first place.

"It's a powerful band," Russell proclaimed. "The music is dynamic and I've gone where I've never gone before. Lochner was a catalyst for moving forward. I wasn't sure how the writing would go at first but soon realized the chemistry is beyond words. He's my co-pilot and one of my best friends."

This past year the musicians hit the studio to cut their official full-length debut. It taps into the bluesy bombast and heavy energy of Russell's celebrated material, but it's a distinctly modern metallic monster.

"We want the new material to blow people's ears back," Russell went on. "It has the elements of the best of GREAT WHITE, but there's diversity, vibe and an edge to it. It draws from our '60s and '70s roots in a more modern way."

Montana agreed. "It's got the classic sound," he said. "The first element is Jack's voice. No other band sounds like this one, ever did or does now. When I was 17 years old, I remember walking around the UCLA campus listening to the band's first EP. I was a fan before I ever joined the band. We're going to maintain that integrity moving forward."

"He Saw it Comin'" track listing:

"For me this is so much more than a collection of songs, it is the culmination of a lifetime of living," said Jack. "It is about addictions, love, pain and many facets of the human condition. I tend to write autobiographically and on this album I dealt with topics I've never explored."

Russell recently told disc jockey Eddie Winters about the songwriting process for "He Saw It Coming": "There wasn't any songs that were really a struggle to write. I write the music on some and I had the melody lines and some lyrics, and I showed it to Robby, and I don't play [guitar], so I've kind of gotta [hum the riffs or chord progressions], or whatever, and he's gotta figure out a chord from one note. So he just picked up on that right away, and it was amazing. 'Cause you write with somebody for thirty-some years and all of a sudden you write with somebody else, and you're, like, 'Okay. How's this gonna be? Is he gonna have a bunch of dumb ideas that I don't like? Or is he gonna think my ideas are crappy? Or are we just gonna hit it off. And I was really surprised when it was just… boom! We were thinking along the same lines. But Robby added a flavor to what I was doing guitar-wise and melody-wise. He's one of those music-theory guys, so we have a lot of moving harmonies and stuff we never had before."

About the song "Blame It On The Night", Russell said: "Most of the material I have written in my life has been autobiographical, [but] this song is one of the exceptions. The song was written for and about my wife's childhood. Because of the subject and the feelings I have for my wife, this was a very difficult song to sing. But I believe that the topic is an important one to bring into the light and out of the shadows."