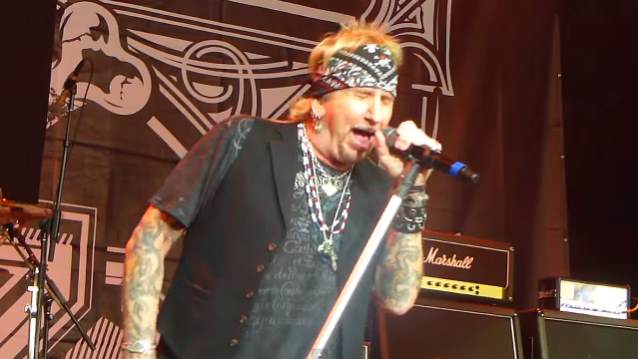 Legendary GREAT WHITE singer Jack Russell, who currently fronts his own version of the band called JACK RUSSELL'S GREAT WHITE, suffered a minor injury this past week, tearing his Achilles tendon. But don't worry, Russell is already recovering and vows to not miss a single show

"I was working out hard trying to be the in the best shape I could be and I tore my Achilles tendon," he explains. "Ain't that a bitch! My doctor told me it was a spontaneous injury and I was doing my exercise routine correctly."

He adds: "I will NOT be canceling any shows and my voice is better than ever so I look forward to seeing everyone!"

JACK RUSSELL's GREAT WHITE returns to the stage this Saturday, May 16 in Minot, North Dakota.

Russell recently revealed to SleazeRoxx.com that he is working on material for a new studio album. He is being joined in the studio by former GREAT WHITE bassist-turned-guitarist Tony Montana (as a guitar player and keyboardist), lead guitarist Robby Locher and drummer Dicki Fliszar.

"The music comes across very dynamically. It's what I always wanted it to be.

"Tony was a catalyst for moving forward. I was never as close to him as I am now.

"We never had the opportunity to write music together before. I also never knew he played guitar. When I first heard him, I nearly fell of my chair. He's my co-pilot. He's one of my best friends. I wish we would've been this close back in the day."

"It's natural for all of us," added Montana. "There's a solid chemistry, and we're having a lot of fun."