Former GREAT WHITE and current JACK RUSSELL'S GREAT WHITE singer Jack Russell was recently interviewed by famed disc jockey Eddie Winters. You can now listen to the chat in the YouTube clip below. A few excerpts follow (transcribed by BLABBERMOUTH.NET).

On the JACK RUSSELL'S GREAT WHITE song "Hard Habit", which was released in 2014, compares to the other songs on the band's forthcoming debut album:

Jack: "[The new album is] done. I'll tell you, 'Hard Habit' is the… I wouldn't say 'worst' song, because it's a great song, but it is at the bottom of my favorite songs, and everybody else in the band, because it was one of the first songs we wrote. It's still a good song, but the other songs are so far elevated than that, you wouldn't even think it was from the same band. Our music sounds like GREAT WHITE, because that was what the voice represented, but the songwriting has been elevated. I mean, I write with Robby [Lochner, guitar; ex-FIGHT] better than I've written with anybody. I mean, the first song we wrote ended up on the album. And it is a very eclectic record, and it's just smoking from top to finish."

Jack: "There wasn't any songs that were really a struggle to write. I write the music on some and I had the melody lines and some lyrics, and I showed it to Robby, and I don't play [guitar], so I've kind of gotta [hum the riffs or chord progressions], or whatever, and he's gotta figure out a chord from one note. So he just picked up on that right away, and it was amazing. 'Cause you write with somebody for thirty-some years and all of a sudden you write with somebody else, and you're, like, 'Okay. How's this gonna be? Is he gonna have a bunch of dumb ideas that I don't like? Or is he gonna think my ideas are crappy? Or are we just gonna hit it off. And I was really surprised when it was just… boom! We were thinking along the same lines. But Robby added a flavor to what I was doing guitar-wise and melody-wise. He's one of those music-theory guys, so we have a lot of moving harmonies and stuff we never had before."

On how he assembled his current band:

Jack: "You know, it was a godsend. Robby was introduced to me through our first bass player and our drummer who subsequently got fired, and Robby stayed with me. 'Cause we had a good thing going; we knew that we work really well together, we wrote great songs together. And when I say 'great songs,' I'm not patting myself on the back. I just got back from my friend's house, and I played him the new record. And this guy was my first roadie. He did the JUDAS PRIEST tour, he did the WHITESNAKE tour back in '84, the original one, so he knows the band inside and out. And I told him, I go, 'This is the best record I've ever done.' And he had his doubts. He thought my voice was gone. He put it on and he goes, 'Oh my God, dude! You sound like you're twenty years old.' And he goes, 'The band… these songs… I can't believe 'em.' He goes, 'It's like GREAT WHITE evolved from cro-magnon to human.' And nothing against those guys [in the old GREAT WHITE band], but this is a different band, you know. And it's just shocking how a different band approaches songs and what comes out."

On the tentative release date for the JACK RUSSELL'S GREAT WHITE album:

Jack: "It should be February [2017]. We were a little late turning it it, just because of the mix. And we wanted to make sure it was pristine, so we sat there — me and Robby, 'cause Robby and I produced it — and we wanted to make sure it was prostine. And now we're scouting out mastering guys. And we [talked] to a bunch of people, and I think we found the guy we needed that's not gonna kill the sound and make it high-endy or too low-endy. And it just sounds… it sounds brilliant."

Jack: "Actually, I'm doing really, really well. My wife, she's a nurse, and she's taking great care of me. She watches what I eat and she makes sure I do this and do that, and she's giving me all kinds of supplements, and she keeps me in good health. It's a really great thing. I feel good, I'm moving around more than I ever have. My voice feels just amazing, and I've been taking care of myself, and I've had a lot of energy. So it's a really good stage show. You don't know who to look at. Everybody's moving around and it's very synergistic. And it looks like a rock band, not just five guys staring at their shoes."

On the moment he knew he was gonna be a rock star, which also served as the inspiration for the JACK RUSSELL'S GREAT WHITE album title:

Jack: "Let me tell you something about the new album: it's called 'He Saw It Coming', and there's a song called 'He Saw It Coming'. When I was six years old — and this is the honest-to-God truth; I've told this story for years — I wanted to be an archeologist. And when I was six years old, my parents bought me the 'Help!' album for my birthday, by THE BEATLES. I remember putting it on my little black record player, and after talking about it, I can remember what it looked like. There was these silver knights and they were jousting, but it was like wallpaper. And I put it on and I was listening to it, and when we got to 'Help!', I remember I was jumping on my bed, singing, 'Help! I need somebody.' Little did I know how much help I really needed. But this was nothing short of the clouds opening up and angels coming down and imparting this knowledge to me, like, 'You're gonna be a rock star.' And I'm, like,' Woah!' I mean, this was heavy for a six-year-old kid. And I'm going, 'Woah!' So I knew growing up. I'd tell people: 'Look, I know.' [And they'd ask] 'How do you know?' And I go, 'I can't tell you how I know. You're gonna freak.' " 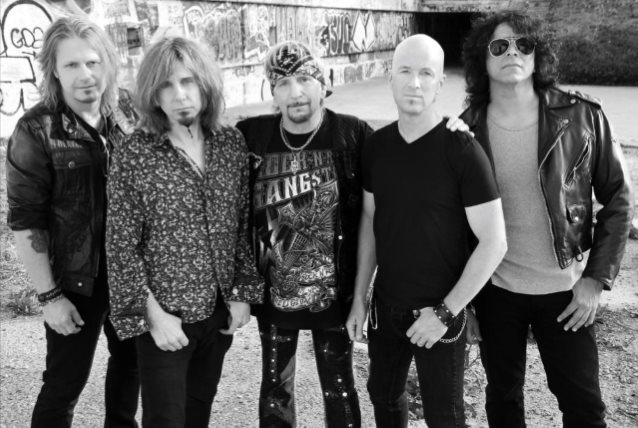