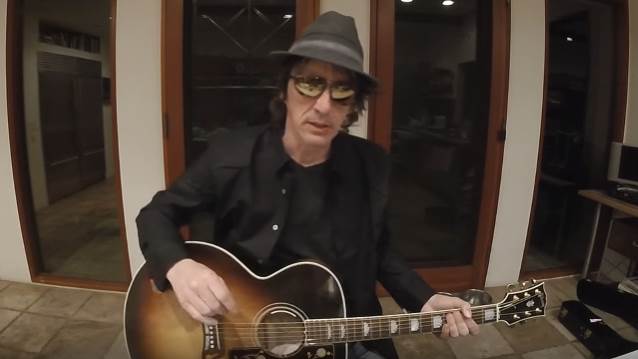 According to The Pulse Of Radio, former GUNS N' ROSES guitarist Izzy Stradlin opened up about his private life to The Wall Street Journal reporter Neil Shah after the latter contacted Stradlin about why he was not part of the current GN'R reunion. Stradlin, who has not given an interview in years, exchanged e-mails with Shah, who tweeted out the contents of a select few.

Stradlin wrote: "As a kid growing up in a small town, I sensed that if I could create music... one day I might make [a] connection with other people around the world." He added: "Nowadays, I constantly write songs, travel a bit and make the most of each day. Life is impermanent. I try to keep this in mind as I make my way along."

Stradlin, whose real name is Jeffrey Isbell, was born and grew up in Lafayette, Indiana, where he was high school friends and bandmates with singer William Bailey — later known as Axl Rose.

His first and only post-GUNS band, IZZY STRADLIN & THE JU JU HOUNDS, broke up in 1993 after recording one LP. He has since released 10 more solo albums between 1998 and 2010.

While GUNS N' ROSES' "Not In This Lifetime" trek features the "classic era" lineup of singer Axl Rose, guitarist Slash and bassist Duff McKagan — with the occasional guest appearance by drummer Steven Adler — Stradlin has not taken part in any shows on the tour, with unconfirmed reports claiming that he turned down a five-figure fee to play with GUNS N' ROSES at the April 2016 reunion shows.

Stradlin told The Wall Street Journal about his absence from the tour: "My non-participation was simply not being able to reach a happy middle ground through the negotiation process. That's life. Sometimes things don't work out."

The GUNS tour continues this summer in Europe, while a massive box set reissue of the band's classic 1987 debut, "Appetite For Destruction", arrives at the end of June.