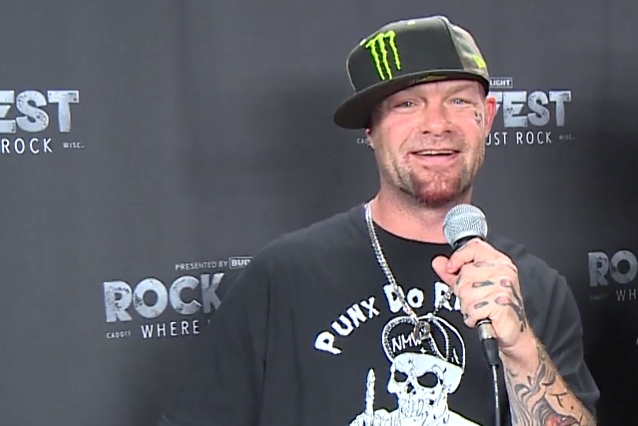 The band is recording its new disc with its regular producer, Kevin Churko, in FIVE FINGER's hometown of Las Vegas.

Asked by Lou Brutus of HardDrive Radio what fans can expect to hear on the follow-up to 2018's "And Justice For None", Moody said (see video below): "Let's be honest: you have a core fan base; everybody knows that. It's like when METALLICA cut their hair, or they made the 'One' video. All of a sudden, half the tree just kind of falls over, and the other half starts sprouting out. So we're of the understanding that we have our core fan base, and we're definitely gonna keep it old school, the way we've always done it. And we love metal — those are our grass roots. But at the end of the day, as artists we really have to experiment. I'm a lover of music, so be it not me to just stamp the black-and-white thing and not take the chance to really do something creative. And I'm happy at the fact that my guys are in the same headspace."

Pressed about a possible release date for FIVE FINGER's new album, the singer said: "It's absolutely open-ended… I don't want any fucking endgame on it. There's no end line to it, man. I really want this to be ready when it's ready. I'd love to have it out by the beginning of 2020. That's my goal, personally, for multiple reasons, obviously. But I think the more time that we take on this and the more heart that we [put] into it instead of just trying to be on some fucking deadline…"

Ivan went on to say that part of the reason FIVE FINGER is taking its time in the studio this time around is the fact that he is "really sick and tired of safe music. I am," he said. "There's this structured way that everybody has to write their fucking music, and it's gotta be verse-chorus-verse-chorus-breakdown — out. And it's so fucking monotonous to me. That's why I loved PANTERA and METALLICA… KORN — that's one thing I've always loved about those guys, and I will die saying that that is one of my favorite bands of all time; top five, for sure. Not just because of that, but because they always experiment, they're always pushing boundaries, and their live show never loses momentum. Oh my God — if you wanna look up to somebody in this industry, start with KORN. That's my opinion. Everybody's gonna say, 'What about METALLICA?' And, of course, I love bands like that — fucking PANTERA is my favorite metal band — but KORN set the bar on so many levels that I feel like if I fall short of that, then I have no right or reason to be here anymore."

The drums on the disc were laid down by Charlie "The Engine" Engen, who made his live debut with the group during its fall 2018 tour with BREAKING BENJAMIN. He stepped in for original drummer Jeremy Spencer, who left the band in December due to a back injury.