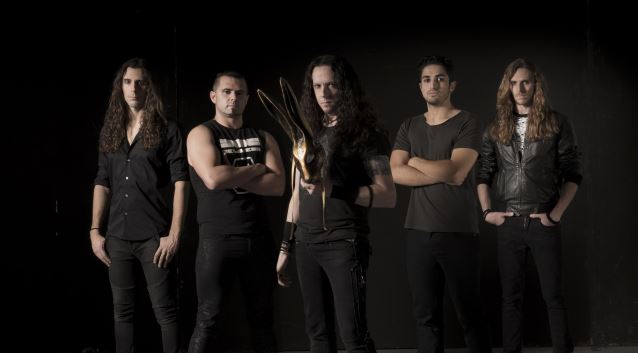 Frontiers Music Srl has announced the signing of TRICK OR TREAT for the release of the band's new album, "Rabbits' Hill Pt. 2".

TRICK OR TREAT is an Italian power metal band originally formed in 2002 as a tribute act to HELLOWEEN. They quickly became popular on the live circuit, started writing and performing their own songs, and finally managed to release their debut album, "Evil Needs Candy Too", in 2006. The record received terrific responses and got TRICK OR TREAT on the road for the following two years with over 100 gigs in Europe and U.S. Soon after, TRICK OR TREAT released their second full length, "Tin Soldiers", which featured Michael Kiske (ex-HELLOWEEN) and Michele Luppi (WHITESNAKE) as special guests. The record was met with excellent response from Japan (where the band entered the national charts at #29). Italy also received the album favorably and the band was invited to play at some of the leading Italian metal festivals such as Agglutination, the I-Metal Fest, and the Gods Of Metal. Subsequent years saw the band touring with the likes of STRATOVARIUS, SONATA ARCTICA and HELLOWEEN.

In early 2012, Luca Turilli announced that TRICK OR TREAT's singer, Alessandro Conti was chosen to be the new lead singer of the band LUCA TURILLI'S RHAPSODY, but this did not slow down TRICK OR TREAT, who — still in 2012 — released their third album, "Rabbits' Hill Pt. 1", a concept effort inspired by Richard Adams's novel "Watership Down".

TRICK OR TREAT says: "This is a really big step for us. We're so grateful to Niki Lou Rosh from Valery Records who, thanks to his hard work and efforts, brought us this great opportunity. We are now ready for this new and amazing experience and stay tuned because 'Rabbits' Hill Pt. 2' is coming soon!"

"Rabbits' Hill Pt. 2" will be released in the summer, with tour dates to follow.

TRICK OR TREAT is: