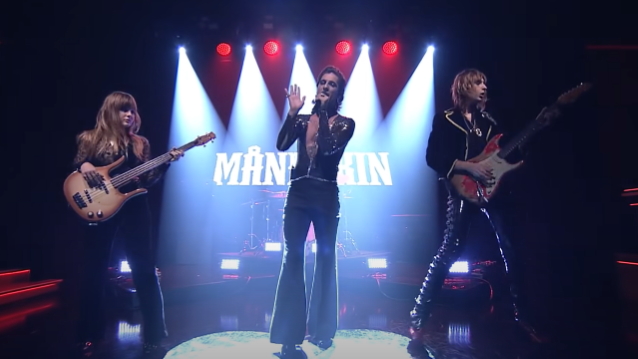 Italian rockers and Eurovision Song Contest 2021 winners MÅNESKIN made their American television debut last night (Tuesday, October 26) on NBC's "The Tonight Show Starring Jimmy Fallon". MÅNESKIN performed their 2017 cover of THE FOUR SEASONS' popular hit from 1967 "Beggin'", as well as "Mammamia", during the broadcast. A massive chart hit around the world, "Beggin'" is currently No. 1 at U.S. alternative radio and in the Top 5 at the U.S. pop format.

Following its epic win at the 2021 Eurovision, MÅNESKIN has climbed up the charts worldwide, achieving unprecedented results for Italian artists: they are the first Italian band in the history of music to crack the U.K. singles chart with two singles at the same time — at No. 6 and No. 10 — and collecting new certifications every week, both in Italy and abroad.

MÅNESKIN's Eurovision-winning song "Zitti E Buoni" peaked at No. 22 on the Billboard Global 200. The follow-up single, "I Wanna Be Your Slave", reached No. 1 on Billboard's U.S. Hot Hard Rock Songs.

MÅNESKIN is scheduled to perform tonight (Wednesday, October 27) at the Bowery Ballroom in New York City. They will also play at the legendary Roxy Theatre in West Hollywood, California on November 1.

MÅNESKIN's latest album "Teatro D'ira: Vol I", was released in March. The LP has since been certified platinum in Italy.

MÅNESKIN will perform, for the first time ever, at key sports arenas in Italy as part of their 13-date tour across the country (organized and produced by Vivo Concerti). That trek already boasts over 100,000 tour tickets sold and six sold-out concerts, and which will be held this winter and next spring.